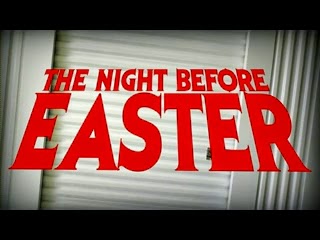 (Admin note: as I write this, it is literally five days after Easter. I don't really care if this is a belated post but I am just excited to do this review as, for one, the directors of this movie happen to be friends with the horror blogger Justin Kershwell of Hysteria Lives, the very man and site that inspired me to run this dump you are visiting right now. Call it hero worship in a sense, I am willing to see a this low-budget hackathon just to see how well these guys do in amateur movie-making as well as pick up a few things that I can learn when I finally muster up to do my own slasher. (I'm playing with the idea, but I don't have the resources to do one...yet)

Of course, seeing I'm not too close with these guys, you can still expect a few criticism from my end. As any good reviewer should do...*puts on my powdered wig and does the best Jebediah Atkinson impression*)

The Night Before Easter starts off with a couple watching a hilariously cheap slasher movie, only to get their night interrupted when they find out that a madman named Alex Sykes escaped his cell and possibly out for blood. Well, "interrupted" isn't the right word as they were calm enough to think about having sex, but true to any slasher opening, they have to die as Mr. Sykes, somehow, was already in the room with them...

Fourteen years (and one opening credit) later, we now follow a group of 20 somethings gathered in a storage building as one of them plans to tell the rest that she'll be moving to London for her dream job (and that she still likes one of the guys who, apparently, is dating a snooty rival). Things gone off rather fine with the gang deciding to play Hide-and-Seek to pass the time, but it soon dumps down for the bad when characters reveal hidden motives and terrible secrets, and then there's some guy in a cheap bunny suit wielding an axe making mincemeat out of them. Not the kind of hide-and-seeking they got in mind, I bet.

Definitely a throwback to the early 80s slashers, The Night Before Easter keeps a modest look by strictly following the basic slasher flow piece by piece, though nudity and gratuitous gore are noticeably missing. I will try to keep things all fair and forgiving as, obviously, this is a movie done by people with enough time, dedication, and passion for the sub-genre, despite low on budget and production experience. This being said, I am really impressed by the writing and characterization done for the film as they did give the characters enough personality and dimension to have us caring about most of them, or at least stay interested. It's very rare that we get o feel for characters in a slasher movie nowadays so this is a big approval for my viewing.

Sadly, we have a good half hour focusing on these characters before the killings begin, which would have been all good if it wasn't for a few distractions; as mentioned, since this was done with a meager budget, the editing and audio made it hard to follow some scenes, and the murders have no solid build-up and finishes way too quickly, leaving me feeling cheated that these guys just die off in unimpressive ways after all that waiting. Yes, again, I did pointed out the budget issue (apparently $4000), but I've seen enough SOV horror flicks to know that money is never a hindrance for a fun kill, and it's just a matter of execution and imagination.

And then there's the killer.
H'okay, how am I gonna put this...He kinda looks like a bad naked impersonation of the late Robin Williams with all his visible body hair dye in white and wearing some bunny eared mask that barely looked rabbit-ish. I'm sorry, but he makes the bloodstained cuddly-bunny suits from films like Bunnyman, Serial Rabbit and Easter Bunny Bloodbath look better in comparison.

It all ends down to a finale that was a mixed bag for me since, on one hand, it pays a good tribute to one of my favorite slashers ever, but on the other, I care very little at that point since I was already worn out on how cheap the slasher portions were.

In totality, The Night Before Easter was an interesting project; it had its heart on the right places but, due to the lack of budget, it ended up all over the place in a slight mess. Perhaps with a better editing and some more effort on the kills, I'm darn sure this movie would have been a fine home-made bodycounter.