Axing Between Planes: The Horror Show (1989) 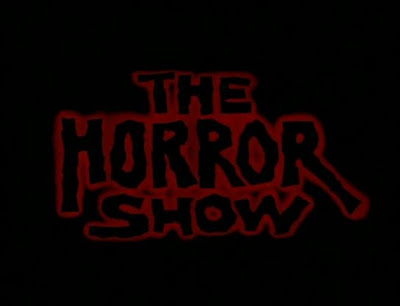 What's so odd about The Horror Show you ask? Everything.

The Horror Show was supposed to be the third entry to the Sean Cunningham's supernatural horror comedy franchise House, which, in this entry, he sat only as a producer and let director James Isaac switch away from the zombies and monsters of the franchise and try what could have been a new slasher opus. However, the use of dreams and a wise-cracking psycho made this film quite comparable to A Nightmare on Elm Street's brand of terror and the matter that Show's plot is noticeably similar to Wes Craven's own slasher movie-on-drugs Shocker (also in 1989) definitely didn't help marking this story well for originality. Then, there's the oh-so-present MPAA disagreeing with the film's juicy gore so a lot of the red stuff has to be cut, further disappointing many fans. (although I'm not sure if the version I watched was the gored up version or not, cuz I was looking at a lot of red stuff) Still, let's see how this Horror Show fare under my thoughts and perhaps find anything else to enjoy about it.

The story is about Detective Lucas McCarthy (the one and only Lance Henriksen) going through a phase where he is haunted by the most horrific capture he'd ever done; that of the infamous meat-cleaver wielding serial killer Max Jenke, shown in gruesome detail through a dream-flashback wherein he slaughtered countless victims and leaving them in varying states of mutilation, decapitation, and half way through a meat grinder, including Lucas' partner and one young hostage that later got her noggin lopped off.

The good detective did eventually caught the perp and had him locked up where he is sentenced to death via electric chair, but the dreams' haunting nature continue to put Lucas in a position where he nearly sleep-strangled his wife and begin seeing weird shit all around. Thinking that by being there when the con fries would put him in ease, he personally arrives at the execution and watch as Jenke somehow survives the first few moments of being burnt by voltage, giving one last death threat to Lucas before finally dying off.

Now with the killer dead for good, Lucas does his best to move on with his life and it's easier said than done when weirder things start happening after the death, including a demonic turkey dinner, Max showing up in every channel of the TV, surge of electricity emitting maniacal laughter, and hallucinations of are-they-dead-or-not family members.

We soon come to learn that Max somehow harnessed the ability to control his physical being and had converted himself into pure electricity. (or something) Though this does very little to explain how a mass-murdering psycho got granted the power to open his own dimension in the later half of the movie, Lucas, nevertheless, arms himself and prepares to fight the monster one more time.

Though wildly enjoyable as a cheesy hookum of all things weird and supernatural, what The Horror Show lacked was focus on what it wanted to be as it juggles the tone between something serious to that involving talking roasts and transdimensional planes. (AKA the weird shit)

The story is workable, one that is curious if you could look pass the hammy scripting and wild direction. It plays around with the mental state of Henriksen's character even though we are sure that Jenke's behind of all the oddities happening; this being said, most of The Horror Show feels less of a slasher and more of a supernatural horror flick if it wasn't for the villain himself and the blade-related kill count still being present.

Thankfully, the two main casts vehicle the movie to a passable viewing, each giving their best performance for their roles; Henriksen does an awesome job portraying a haunted cop whose desperation for some sense to what's going on with his world left him always on edge and willing to consult anybody for an answer. It's a doable role but as far as troubled heroes go, the movie's signature character, Max Jenke, is what gave it the most entertainment value; played by Brion James of the Bladerunner fame, his presence is a solid tribute to A Nightmare on Elm Street's Freddy Krueger from the maniacal smugness to the body-horror inspired reality bending powers, and much like the burnt bastard, he spends his time playing with his kills before doing them away. The overacting of his supposed uber-evil does get in the way of making him any more frightening than what he is intended to be, but its cheesy charms did gain this film an audience so I don't think this is much of a real flaw but rather a matter of taste.

The only real issue I see here is that the nature of the reveal on how Jenke ended up being in his near-supernatural state; it just came out of the blue and is a lot less practicable that the simple "deal with the devil" shtick makes more sense. There's also the point that, given the killer's new powers, the plot could had involved more thespians for Jenke to try it on and give us a better looking bodycount. Then again, looking at how much focus this movie is giving on story, this is yet another factor that makes The Horror Show a unique entry to this sub-genre and one that could learn to live with.

Whether you call it House 3 or simply The Horror Show, this oddly campy, story-driven slasher would have been something to be reckoned with but falls short from a better rating due to its lack of punch. The story is good, the acting is good, but the film just doesn't know where to lead it all and what we end up seeing is a rather passable supernatural horror with some fitting cheese. Good, but not great.