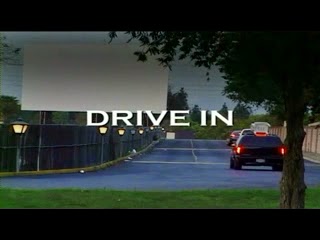 Drive In is one title that rarely gets thrown in a conversation as horror fans either have seen and hated it, or would have confused it with the infamously schlocky 70s proto-slasher Drive-In Massacre. Comparing the two however, Drive In is a more straight-forward take on a bodycounter and one that actually fares better for me.

The story is simple enough to follow; a drive-in theater across town is being petitioned by an upset community for showing nothing but horror movies. (Troma horror movies to be more exact so…yay?) What these people didn't know is that one of these concerned citizens have been locking up their mentally handicapped son Billy in their attic, with nothing but these films to watch every night for entertainment and company.

One night, however, Billy found a way to kill his way out of his room and begin a murder spree of his own, basing every murder from what he learned from the movies.

More or less, the film nothing too complex as everything is by the book as any standard slasher would be, which can either be a good or a bad thing based on your taste for horror flicks. Drive In has a level of cheesiness, both acting and scripting, and the plot juggles its focus back and forth from the staff dealing with personal and job-related issues, to Billy murdering anyone he can hold on to with anything he can use for the time. This is all done in a steady pacing and with characters bearing simple personalities that are to be slaughtered later in the plot (in defense of the unknown casts, some actually tried to be two dimensional), something that I’m sure only patient viewers or hardcore slasher fanatics can live through.

The murder and scare scenes aren't all that bad despite being overly simple. They have some good build-up that keeps you guessing whether it will or will not happen, but the problem here is that, seeing Billy supposedly learned the joys of murder from gory Troma movies, some of us would expect he’ll do the killings quite messily. What we have here, rather, are simple strangulation, stabbings and braining. Then again, it does help ground the film in a more realistic light, both in terms of budget and storytelling, a bit of a say of how violent movies affect unstable or immature minds. Of course, this was dropped the moment the slasher parts start and we’re simply rolling down a familiar hill.

Drive In certainly not one of the better slashers to be released out there but it certainly isn't the worst. Like I said, the cheesiness and simple plotting worked well enough for me and I didn't mind the killer’s basic approach to murder, so I’ll give the movie an approval for effort, even more if it tried harder.