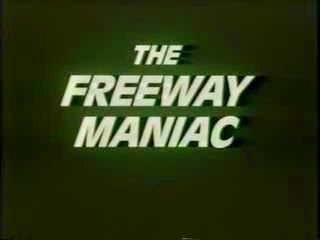 Sometimes, it’s a healthier option to just go with the flow and let the stupidity of a movie entertain you for whatever it is worth. This, of course, is a gamble as some movies can be so stupid that loosening up would lead to a celluloid torture comparable to having your skullcap surgically removed and have your brain sautéed by Hannibal Lecter. Then again, there are also those movies that are so effin bad, it’s effin lovable and worthy enough to be enjoyed over and over again like a cheesy 80s pop song.

The Freeway Maniac, doesn't fall in any of these category. In fact, it is best described as confused.

It tells the story of Arthur, our titular freeway maniac who got thrown to a mental asylum for murdering his mum and her boyfriend as a kid. He grows up into a fine well-built psycho with a mullet who, one day, finds the chance to escape captivity and murders every orderly that tried to stop him before hitting the road to continue the joys of spree killing.

Eventually, he crosses path with a rising starlet, Linda Kinney, who was just having the worse of luck; not only did she found her boyfriend sleazing up with another bimbo and nearly got herself assaulted by a couple grease monkey when her car broke down in the middle of the nowhere, she now has to deal with a runaway psychopath. After a lengthy chase, Linda eventually saves herself by tossing off Arthur with her car; psycho got captured, Linda got famous from the attack and becomes some sort of cult favorite cuz, a year later, she’s acting for a low-budget scifi movie titled “Astronette”.

While Linda goes into filming, Arthur escapes for the second time (!!!) and murders his way cross country to the shooting, bumping off some of the casts and crew before going for the one that got away! Will he succeed? Will he fail? And how does anyone survive a four story drop? 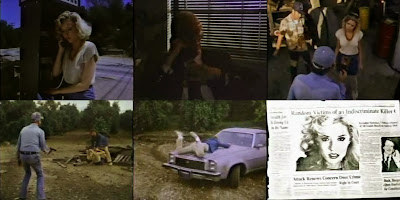 I'm going to keep this review as simple as possible since there isn't really anything new to tell here; Arthur is a smirking maniac who simply kills anybody that are literally in the way, Linda is a girl with a dream, victims remain victims and the kills, though plentiful, reek of dairy.

Seriously on the latter, this movie boasts an impressive double digit killing spree, with some of the more entertaining bits being the bellyflop of death that Arthur did on a orderly early in the film (Take notice, again, of the "four story drop" claim I made at a previous paragraph), some guy getting ran over with a motorbike (with an obvious ramp placed under his shirt), and an impressive looking truck stunt that leads to multiple casualties. The rests of the count are simple stabbings, strangulation, blunt object braining and one guy getting hit on the chest with a chair. For the sake of this movie's corniness, I'm counting that last one as a death toll.

Production, from acting to lighting, to special effects and direction, is abysmal, however, but it's naturally expected from a low-budget cheesefest like The Freeway Maniac. Like, for real; with a plot so thin and straight forward, I wouldn't expect high standards. I guess that's one particular reason why I'm so forgiving to this movie; it's so unintentionally funny and it stank the stink of a hundred McDonald Big Macs, delicious in every way but it clogs up your arteries, destroys your liver and makes your butt look big.

That being said, this is yet again another junk food equivalent of a slasher movie, not meant to be enjoyed by just anybody, but by somebody! Somebody who can exchange character development for a dead body for every minute. Somebody who can enjoy seeing hammy acting and cheesy special effects. Somebody who is probably smoked on something and is completely unaware of what they're watching. Have I ever done drugs? Hell no! I got The Freeway maniac as an alternative!

Either that or Horror House on Highway 5 but even I still can't stomach that!