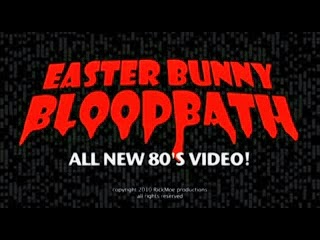 Big killers in mascot suits. Sometimes creepy. Sometimes not. All boils down to how well said creepy suits are handled. 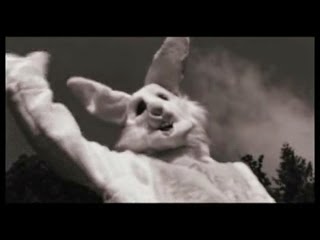 In this, yet another, Easter themed slasher (I think we have enough Easter slashers guys. Let's give Kwanza a chance! Or was it Quanza....Cwuanzah?), we start off with a black and white blast to the past, the 1960s to be more exact, where we see two siblings trading Easter Sunday candies. The younger of the two, lil Peter McKay, then spots a man dressed up as the Easter Bunny and welcomes him with his sister at the front door. Expecting more sugary sweets, they instead got greeted with a cleaver and big sister losts her head. Literally. 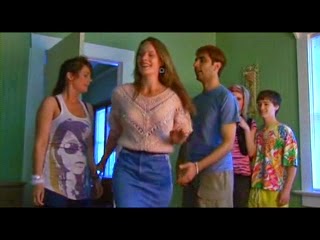 Forward 20 years later, Peter decided to celebrate his first Easter Sunday since the incident. He's doing this with a couple of friends and his girlfriend at his late father's woodland cabin, boozing up on beer and getting down with his sweetheart, all the while trying to disregard the creepy visions of a weirdo in a bunny suit.

Of course, the bunny mascot might be more real than he imagined as one by one, random bystanders and his friends fall victim to it. Is the killer from Peter's childhood back for another bodycount? Or is someone in the party crazy enough to do the killings themselves? 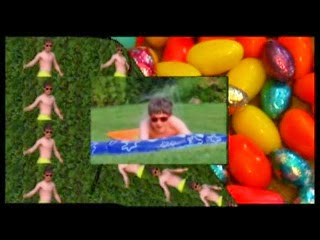 Early in the film (about 5 seconds), Easter Bunny Bloodbath made it clear it's calling back the days of old, when VHS Shot on Video horror movies ruled the video stores. Everything from cheap viscera to messy editing, it's a respectable thought and I for one give the producers credit for that. As for the actual movie, uh... 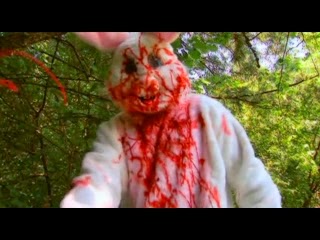 Let me put it this way; I can tell that this is supposed to be a horror-comedy, or at least a tribute to the so-bad-its-good Do-It-Yourself horror of the late 80s. There's cheesy acting and hammy scripts, two guilty pleasures we all known and loved from those age-old VHS titles, but the throwback was cooked to a burn and it ended up as the kind of humor that can be a hit or a miss. Unfortunate, and it could just be me, there was more misses than hits and I found myself either rolling my eyes, or smacking my own face to make sure I stay awake. (Pacing is, again, an issue. Would had kept me focused if the audio wasn't so crappy...)

So the horror comedy portion failed, what else could go wrong? How about store-bought Halloween props used as gory entrails? Or cheaply done digital splatter cuz budget? The victims to these killings aren't that likable themselves (annoying teenagers taking the role of college students. Yeah, really convincing, guys) so the point of these killings are lost from some fan's point of perspective. 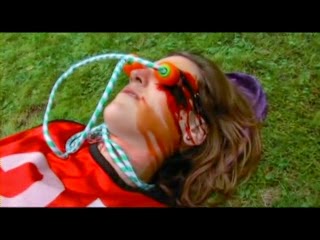 I'm aware that the budget isn't all that big (they never was for SOV horror) and the production was as convenient as hobo with a can of beans, but these cons made the entire film looks like a slasher take of a grade school stage play. Honestly, they could had kept it Halloween (1978) simple and work on the creep factor rather than trying to make the film as gory as possible, but they wanted a nonsensical slasher and that's what they did. I shouldn't say anything ill for that claim as, being a guy with a soft spot for bodycount films, I appreciate the effort. But in the end, it just looked ridiculous. 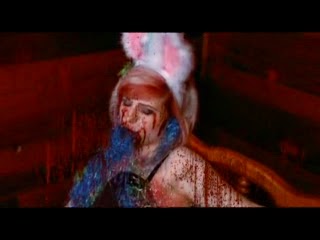 The story is as basic as any backwood slasher would go: kids to go the woods, kids get killed, killer chases final girl, big twist, everybody dies. Nothing that will stray away a die-hard fan of the sub-genre but the execution is certainly something that'll divide attention, which is why this film have a few fans out there who simply loved the Shot-On-Video-Love-Letter approach Easter Bunny Bloodbath have, while I find myself siding with those who found the cheap, plot-hole heavy buckshot to the face that is this film nothing but a waste of time and DVD space.

So with all of this said, I'm not gonna stop people from seeing this. If they want to see a modern day home-made horror movie then let them. I'll just stick with my opinions that killers in big bunny suits look better and creepier skulking in the dark, the only good movie out there that features a killer mascot is the Ozploitation The Director's Cut (2009), and the only good Easter themed slasher made in existence was Easter Bunny! Kill! Kill! Nuff said.