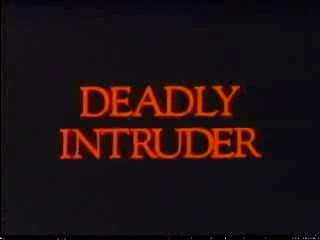 A loon escapes an asylum one night, killing two attendants with a trusted plank and then breaking into a house where he forces a rather lonesome (and chesty) gal down a kitchen sink, drowning her while we get a good look on her sizable melons.

One unproductive discussion between local cops and a dog shit in a mug later, we next see a shifty looking drifter who proceeds to visit a small town called Midvale, more particularly that one isolated ranch where one lonesome woman named Jessie is living at, preparing for some guests later that night. Said drifter wants to do some hard labor for her in exchange for sandwiches, unnerving Jessie. Very reasonable as this guy simply won't leave her alone and skulks around chopping wood for her, but with her friends coming over, she continues whatever she was doing and wait it out.

Surely enough, the skulker leaves Jessie alone when her dinner guests arrive but just as her party goes to a full swing, random people starts to get murdered nearby. Folks with car troubles, a fat repair man, attendees on a chop shop, just to name a few innocent bystanders who gets snuffed out by a really mad loon but the question posed is who the killer is? Is it the too-obvious but otherwise shady drifter? One of Jessie's guests? Or perhaps that escaped loonatic everyone's occupied about not too long ago?

One thing is for sure, while the good two-thirds of the movie is purely slasher trash, the last act disappointingly switches to a hostage thriller that lagged the film to a hobble and climatically ends with an unorthodox twist to the identity of the killer. It's edgy in a lack of a better word but it just doesn't work too well if the near totality of this last act was spent creating such a monster to make the twist anything but workable.

Deadly Intruder is pure horror dreck that's a bit more uninspired with its plotting, hence forgettable despite its honest attempt to top a notch. Would have worked actually, but it's low budget really made it impossible as bad lighting and horrid scoring get in the way too many times, if not the sleazy tone that's too crude even for a film of this kind. Not much can be said for positives, so I really suggest you good folks out there to stay away from this one. 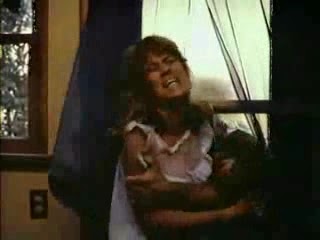 Unless you're already a fan of this film. That being the case, good luck with that.

Bodycount:
1 male bludgeoned with a wooden plank
1 male brained with a wooden plank
1 female drowned in kitchen sink
1 male crushed underneath a hydraulic car jack
1 male axed on the back
1 female gets her face shredded on a running fan belt
1 male had his eye plucked out with a screwdriver
1 male dwarf-tossed to a TV
1 female strangled
1 male beaten with a fire poker
Total: 10
Posted by Kaijinu at 8:52 PM