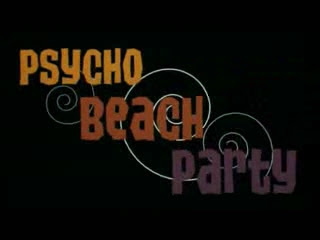 Let's say you got a huge melting pot and you put in a bit of Scooby-Doo inspired whodunit and retro-ness, a 60s teen drama with a lot of surfing, and a series of 80s slasher-style killing spree. The result? More or less, you'll get this fun and very weird dead teenager film!

Set in the loving, sunny and sandy 60s America, young Florence Forrest just wanted to surf; while most girls around her age were interested in boys and sex, she wanted to ride the waves with the dudes and just have a good time. But hindering her from her saltwater tide-riding dreams would be the occasional bullies, Florence's overbearing mum, and the fact that Florence herself has multiple personalities, triggered whenever she sees a certain shape or pattern.

Oh, and did I forget to mention there's a gloved killer out offing people? Well, yeah, there's that too and they already took out one girl on a crowded drive-in theater a night before so it's inevitable that a manhunt will happen.

But fate seems to finally opening up to Florence whilst the chaos; consulting a surfing legend known as The Great Kanaka, a gang of rowdy and lovable (yet interestingly pale) beach boys gave her a shot and taught her how to surf. Things were going fine with Florence  earning a surfer's name, "Chicklette", that was until the bodycount began to rise and her over-sexed counterpart "Ann Bowman" suddenly surfaces and smittens some boys including The Great Kanaka himself!

Could there be a reason behind the murders? Are there any connections? What is it behind Florence's multiple personalities? And did any character in this film ever noticed those breasts on that supposedly male cop?

Based on an off-Broadway play of the same name, Psycho Beach Party is something of a John Waters version of a 60s teen film (possibly Gidget (1969)?). Camp is skyrocket high on this film and nailed everything a vintage beach film should be; hammy lines, cheesy acting and even some humorously questionable special effects  used on some scenes just to authenticate the nostalgic feel of the film. But what I applaud for Psycho Beach Party is that it manages to ring in some good casts and build enough likable characters to have us watching in interest.

Unfortunately, while it got the 50s surfer film part right, the rest of the mix didn't go in too well; the psycho-drama didn't sink in thanks to this movie's upbeat and spoofy tone so any sense of empathy or plight are either uneven or totally absent. Murders are also simplified and mostly strays away from the red stuff but some are a bit comical enough in a satirical sense and morbid enough to be forgiven.

It's more of a matter of taste and audience that makes Psycho Beach Party works; some may find the lack of any real depth and the point that the script may not work well on the big screen as it did as a play, but I'm sure there will be those who will appreciate the uber-high level of cheesiness and nostalgia the movie reeks off and dwells in so generously. Least to say, everybody involved in the production tried and I'm a sucker for unique dead teenager films that really worked for it. So that being said, I'm more than willing to overlook any flaws for the silly entertainment this film has to offer. It's not a perfect spoof or hybrid in anyway, but it passes with flying, -er I meant, surfing colors.

Bodycount:
1 female gets a throat cut with a knife
1 male found dismembered
1 male knifed on the chest, castrated
1 female found beheaded
1 boy thrown off a swing set, killed
1 male shot to death, falls to his death
1 male knifed
Total: 7
Posted by Kaijinu at 10:47 AM