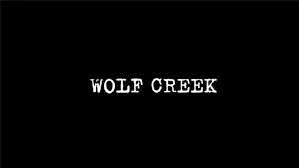 Ah, the memories I have with this movie. It was a few weeks after my Grandmother passed away that I finally get to see this film on cable and seeing I was house-sitting for the family while we prepare to move in to gramma's house some days later, I get to see this alone. Late at night. Uncut. What I was able to learn that night was, clearly, this film's made to scare and disturb.

Based on a real murder case known as the Backpacker Murders, English tourists Liz and Kristy and their Australian friend Ben are on a trip to the land down under, partying their nights away as they journey across hot desserts and wildlife to see a 30,000 year old crater known as Wolfe Creek. Upon reaching said destination, however, they find themselves under the complications that their car won't start and they're stranded as day passes to night. They are soon rescued by a Mick Taylor (John Jarrett), an outback hick who tows them to his home and invites them to stay overnight around his camp until help arrives in the morning. Needless to say, as if Mick's eccentric nature was not a clear sign of a problem, the tourists will soon find out his real intentions as rotting corpses are found and a hunting rifle is drawn at them. 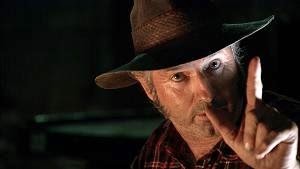 There's some ingenuity regarding Wolf Creek's direction and characterization; while we never get to know our leads that deeply, they are still likable for their sincere nature and fun-filled mission to travel and experience everything Australia has to offer, coming in a sense like we're simply hanging out with close friends as a nice alternative to scripting character development and making them root worthy, especially once we get our first hint of trouble: Mick's thousand yard stare.

And speaking of the devil, apart from our leading chaps, we also have Jarrett's character drawing some memorable light, even more than all three of them combined and for a good reason; despite looking like a Crocodile Dundee knock-off, the serial killing hick is perhaps the film's biggest strength and one of the most genuine addition to slasher villains that will haunt ages. On the exterior, he's a grungy yet well-meaning coot who just wants some company over his lonesome trailer, but once he catches you off-guard, he's more than happy to bring you to hell in any way imaginable.

Knowing his sudden presence is too good to be a true Samaritan, we anxiously wait for him to snap; when it does happen, it's all too suddenly as we're re-introduced to our casts in media res of a horrendous situation, gagged, beaten and assaulted. Around this part, it's all familiar footings as Mick engages to a cat-and-mouse game to the unfortunate backpackers, torturing and hunting them at the dead of night. Some old cliches are found around this act but they're thankfully overshadowed by a level of intensity and realism of the situation, creepy even as Mick's witty comebacks has a bit of sick naturalism in it. (though his sudden ability to reappear in the right moment in the right time is sheer movie magic) There's also some nice grainy visual that utilizes night shots of vast plains and rocky mountains, coming up as a bit of a taunt at the victims as if showing how helpless they are in their predicament. 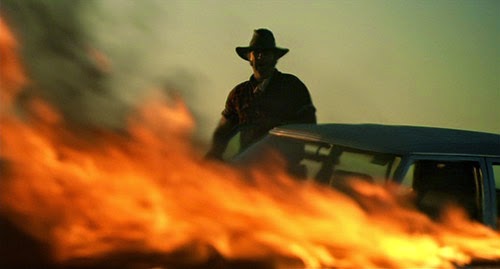 While there is a bit of wait before all this chaos happens, it's well worth it; the movie is notorious, unsettling and brutal, pulling off the most terrifying acts of depravity and torture despite the miniature kill count. Genius actually as with only two leads trying to escape we get to focus more of our attention on them, thus amplifying the tension; just goes to show that a slasher can sometimes work without a high bodycount just so long as the thrill pumps it running and fear, may it be the casts' or ours, keeps it alive. (And judging from the appalled "normie" critics, I think this movie pulled its job quite perfectly!)

It's not gonna be everybody's cup of rainwater but for those who had the guts to sit through this nightmare better brace themselves; sadism, degrading assault and complete hopelessness are waiting to greet you at Wolf Creek.