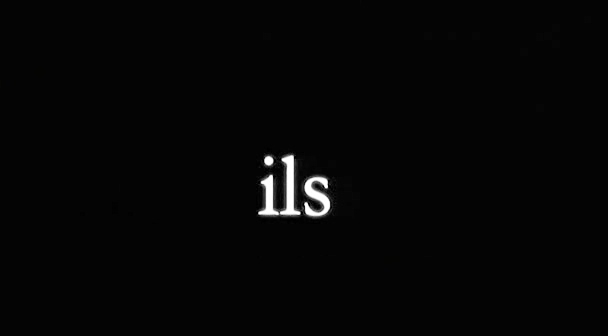 Home invasion scares me a lot. May it be a scene or the subject of a movie itself, the idea of having someone breaking into your house to terrorize you for whatever reason they can think of is pure terror.

Them, or Ils in France, is another entry to the suspiciously growing number of French horror films featuring home invasion. High Tension (2003), Inside (2007), In Their Sleep (2010), if I've known better, the French seems to have a fetish for this stuff but comparing this title to the rest, Them is quite tame on the blood work, focusing instead on delivering tight scares through simplicity.

The plot is easy to follow; a couple on their vacation house suddenly find themselves terrorized by someone attempting or may have already broken in. What first started as a series of unusual occurrences such as TVs being turned and left on, strange noises and one stolen car, it soon escalates violently as the intruder begins to stalk and harm them in their own home.

What settles Them as a worthwhile viewing is that you could actually feel some grit and nihilism around the entire run despite the obvious horror clichés. The opening had us watching a bickering mother and a spoiled daughter getting stranded in the middle of an nearly isolated road; five minutes after this, the car won't start, the phone has a bad signal and the killer turns out to be hiding at the back seat. Further into the movie, more of the classic dos and don'ts such as wandering into an attic alone or yelling whilst on the run from a maniac nearly grounded Them as a stereotyped slasher but thankfully, these are gripes outnumbered by positives.

While it the direction is slow-burning, taking at least a good third before the couple realizes the break-in, what work here is the low cast count; by having only two leads and taking the time to play around on what this couple are up to in their lives, we do get to see a bit of realism from these characters as ordinary people that you can meet at any day, rather than one-dimensional stereotype cartoons that plague almost every horror movie made.

Once the horror starts, they get frustrated, confused and worn-out as something they never expected is suddenly happening to them for no explicit reason. It's all natural coming from them and the film's lack of explanation for these attacks comes out bone-chilling given the twists revealed later on. (Although, it's no surprise there's more than one of these hoodies. The title gave it away)

Shot in a grainy and hand-held quality, Them sports some great camera work and naturalistic shots. The last third of the film effectively utilizes these elements as it takes place out in the woods and into an unused sewer tunnel, a claustrophobic final back-drop that's as intense as it is suffocating with low, flickering lighting and maze-like turns. It also has a brief chase scene reminiscent of those commonly found in slasher movies, ending with a uber-simplified and creepy final shot that makes you think twice whenever you see an empty lot.

Not by far the bloodiest home invasion flick, but otherwise workable for it's simplicity and steady tension. Best served side-by-side with a little something titled The Strangers (2008)!