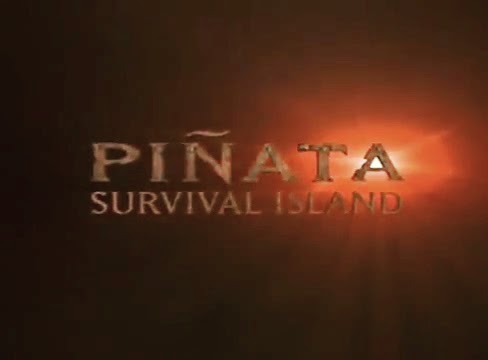 Welp, just when you think you've seen it all: killer robots running loose in a mall hunting teenagers, an alien slasher that makes doppelgangers out of his victims, death itself making various complicated accidents to kill off those who escaped its grasp. The world of slashers have munched in and out all sorts of boogiemen tackling everything from the simpliest to the complicated, and then the overly creative and original. With a title like Piñata: Survival Island, you can simply guess that this movie's going to involve a Piñata and true enough, our killer monster happens to be one.

How you ask? Well the movie surely took its time to explain it, opening with a voice-over narration about a famine that struck a South American tribe some centuries ago, apparently as punishment for the tribe's multitude of sins. As the land dries up and starved most of its people to death, the tribe shaman molded a couple of clay piñatas for a ritual that's supposed to rid the land of this plague, placing the evil that caused all this in a hollow clay demon.

When the rites were done, peace and prosperity resume across the land and the cursed piñata was sent floating down the ocean, hoping nobody will ever find it.

Unknown to them, the cursed piñata somehow gets washed up into the island after all of these years and one of the groups mistaken it as a prop for the game. Upon breaking it, the evil gets released, possesses the horned piñata as its body and begins to beat anybody that crosses its path, stealing their souls to make itself more unstoppable.
Obviously, this a horrid movie. It should be bad, really, as everything about Piñata is questionable in execution; the direction tries to be as serious as possible despite the silliness of its concept or the lack of any real plot development, the monster looks incredibly ridiculous which worsens every time it goes CG on us, and the characters are all dimwits. (Well, most of them were. One of the guys' educated enough to know what's going on at some point)

Some music video-style editings was tossed in once in a while that I just find really strange and unnecessary. In fact, I could have rated this film a little higher if they just kept the little guy and its gory kills purely traditional as the "guy in a rubber suit" gig didn't appeal much to the directors and they decided to give the killer piñata some CG enhancements, plus two pure CG forms that makes little sense apart from their attempt to make their creation "scarier". (Uh, no, making a monster look like a reject from a Diablo game is not scary. Decision to do so is!)

Still, can't hate a dreck this bad if it entertains and when I said that, I meant it in a so bad, it's laughably good tone. Sure, it's ridiculous but what do you expect from a film about a killer Piñata? A down to Earth drama about the hardships of being stranded in an island filled with piñatas loaded with booze and deers to hunt? Well, actually that does sound like a good film to watch, but that ain't the point for now! Piñata: Survival Island is no means a classic, but as a trashy slasher flick featuring an angry pygmy, there's enough gore and silly B-film worth of action and atrocities to keep us watching, laughing and chugging down bottles of booze alone or with your drunken friends, sitting proudly with the likes of other obscure cheese classics like Pieces or Truth or Dare: A Critical Madness!

To simply put it, what you think of the movie is all up to you; if you like your horror straight with a brain, then this is gonna be a very long sitting for you but if you're looking for a party film to bash and gawk at with your buddies, or just into the sins of the celluloid, then pack a dead brach cuz Piñata: Survival Island is your destination!