He who of the Golden Violin with a Built-in Knife: Paganini Horror (1989) 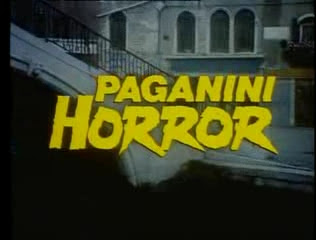 With their new song trashed by their manager, Kate, the lead singer of this unfortunate band, receives some help from her drummer as he offered to give her a piece of an unfinished song written by the fabled Demon Violinist, Niccolo Paganini, which he bought from a codger. (Donald Pleasence in a cameo) Though worrying about the fact that the song might still hold some copyright issues due to its incomplete state, Kate was nevertheless excited and decided to go to Paganini's dilapidated mansion itself to shoot a music video promoting their new song.

However, little do they know, the said piece of music had some unusual connections to Paganini. (Well, he DID made a pact with the Devil) Not too long, the murderous spectre of the Demon Violinist himself comes back from the dead, donning a golden mask and wielding a bladed violin, and began killing off  the band members and crew, one by one as well as doing his own brand of supernatural hauntings.

One part supernatural slasher, one part Giallo (I think), all cheesy insanity; Paganini Horror was one of the last films Luigi Cozzi of the Contamination (1980) fame worked on. Now, I only know at least two of Cozzi's films and I have some level of respect and awe to them, especially Contamination, but I can't help but feel a large sense of disdain for this title. For one thing, the plot makes very little sense from the beginning; the fact that a lot of cheddar was sprinkled all over the supposedly terrifying and intense scenes here (death by fungus anyone?), overall cheapness of the production was obvious (those costumes! oh God, those Costumes!) and the band's so-called music sounds awfully ripped-off (oh wait, they were. Bon Jovi and Electric Light Orchestra should sue), none of it helps making me think otherwise to enjoy this film.

Characters are unbelievably overacted, but looking at the brighter side of this, at least they get killed off in a level of creativity. Maybe too much creativity on that terms, but I'm really digging way low into the barrel here for something nice to say.

There's a twist ending where one of the characters before turns out to be more than what they seem to be. Not that it mattered if the rest of the film was junk. No, it's rather desperate and overdone attempt to do a horror film; too many ideas were played out, none of them fitted with the other.

Thus, my dear readers, I say this to you: watch on your own risk! If you like your horror with its brain through a woodchipper just for it to prove that it can function without one (which rarely works, mind you), Paganini Horror might be the film to delight your evening. Otherwise, I think it's better if you find yourself a REAl giallo to watch...