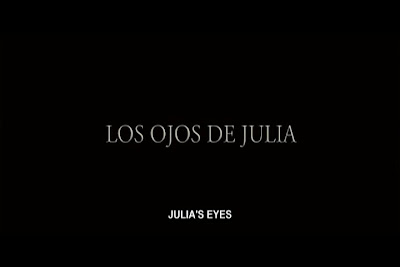 Julia's Eyes (Los Ojos De Julia) (Spain, 2010)
Rating: ***1/2
Starring: Belén Rueda, Lluís Homar, Pablo Derqui
Hellboy's Guillermo Del Toro only overlooked the production of this estranged yet beautifully haunting foreign thriller, which may not be all that a bad thing seeing how well played this film is with its giallo-esque murder mystery, some bits of slasher violence, and a whole lot of soap opera that did managed to tug some heart strings

Julia's Eyes follows a woman's plight for answers after finding her blind twin sister hanged in her own basement; while the authorities rule it out as a simple suicide, Julia (Belen Rueda from Del Toro's own producer work, The Orphanage (2007)) thought otherwise and begins snooping for clues that would prove her sister was actually murdered. Unfortunately for her, Julia is also suffering from the same ocular sickness her sister had and it is slowly eating away her eye sight. As the stress of her own investigation and sickness starts to blind her, Julia's determined to discover the truth before she completely loses her vision. But someone out there doesn't want her to find out the truth and they're covering their tracks by murdering anybody who got in too close to his modus.
While Julia's Eyes can be a tad overplayed when it comes to portraying blindness as a sickness, but it did captivate this condition with much effectiveness and a bit of understanding as a horror thriller, an idea that's been played before in such other thrillers as Afraid of the Dark (1991) and cheap TV flicks like Blind Fear (1989).

Interestingly, Julia's Eyes is a pretty layered story; for one, the near-two hour plot took its time to get going and once it did, it slows down right in the middle as Julia, finally blinded after the stress of seeing her own husband apparently commit suicide, rekindles her love life with her own social worker who may or may not be our killer. If you're overly familiar with your thrillers, you would have guessed the twist this film was aiming for by then but it at least did provide enough red herrings to keep us astray. These two plot developments divide the movie into two separate tones, the first being a straight face murder mystery with a smart and independent heroine who actually looked like she's going to succeed with her own investigations, but when the disease finally took over, the film shifts to a standard slasher flick down to its woman-in-peril subtext as Julia's been reduced to a desperate victims trying to survive a killer with a weird fetish.

But despite these problems with the film's flow and consistency in tone, Julia's Eyes is still an engaging film in the end. There's beautiful photography and cinematography at play and it helps keep the sullen atmosphere, tension and cringingly macabre moments as beautiful as they are a little downbeat as possible.

The killings are very few but they're dabbed with enough savagery as the film explores the aftermath of each; you could say the drama on these deaths are really workable, as lovers and family are dying off left and right and there's a sense of realism to these reactions thanks to Rueda's stellar performance and some really dramatic scenarios. In fact, every once in a while, there are some very warm moments that help these characters be worthy of rooting for. A few are awfully bittersweet, but if you can stick to the end, you'll see the biggest slice heartbreak that I'm pretty sure would melt even the iciest of hearts. (I dare you not to shed at least a tear watching that scene. I dare you!)

Drama, suspense and horror, Julia's Eyes is a fine example of a film to fully understand all these and maintained it (as much as it can) to create an effective story. It has enough twists and atmosphere to draw any thriller fanatics to it, and at the same time, offers something more for a seasoned slasher enthusiast other than a high bodycount.

See it if you hadn't yet. Worth every minute! 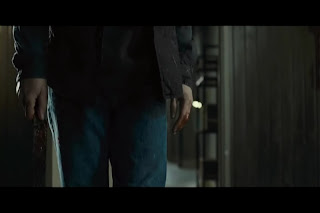