All Can Be Swept Aside with Annihilation: Tenebre (1982) 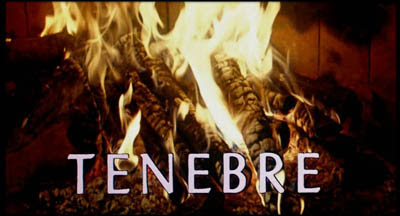 
After a brief hiatus from directing "straight" gialli in favor of his two supernaturally-fueled "giallo hybrids" Suspiria and Inferno, Dario Argento went back to the sub-genre in the early 80s, creating this magnificent Euro-horror. Often welcomed by many fans as one of Argento's finest film, Tenebre is an Italian giallo at its best, dotted along with the most gruesome bloodletting to compete with the brutality of the slasher films of its decade as well as the best twist and turns the sub-genre can offer.

Peter Neal is an American novelist visiting Rome to promote his new giallo novel "Tenebrea", where it gathered quite a name for itself both from hardcore fans and Nay-Sayers. Unfortunately for him, someone had taken their love for his new book to a whole new level by murdering women in a manner based on his works. As the bodycount began to climb, and the killer somehow finding ways to toy with him, Peter has no choice but to try and find the culprit himself before the death threats he's receiving becomes a horrible reality.

As a plot, Tenebre's premises were rather basic for a giallo movie, wherein Argento himself had based this film on a personal experience involving a fan sending him obscure letters. Despite the simplicity of the idea, the film somehow (through a series of twist, turns and visual clues) managed to be an enjoyable and really engaging mystery that dares you to piece together all the events, all the while playing with your expectations. You can actually notice the director's theme of sight and memory played around for some of the film's major plot points; showing how something that should or shouldn't be there could mean differently throughout the story's development, a similar play he did in the climax of Deep Red and Suspiria, as well in his later works such as his underrated 90s giallo Trauma.

Interestingly, Tenebre is apparently Argento's first take into eroticism, with the story focusing a lot on sexual deviancy and gender, a fact that made this film's misogynistic bodycounting more controversial. It's given early on that the culprit has a tendency to enjoy their killings as they take quick snapshots of the bodies as a form of memorabilia with a voyeuristic take on it, the reason for this only hinted in snippets of flashbacks that may explain killer's mindset on womanhood. This was, in turn, exploited rather formulaically in the sense that Tenebre shows its obvious American slasher film influences, featuring nubile and sexually active beautiful women being punished in a more savage manner than their male counterpart's demise.

It's appallingly sexist, but it did forged a rather unforgettable story and a killer to be feared for its sheer madness, so by the time the twist reveal came, the impact of it were made all the more shocking as the culprit was either someone we least expected, or rather one we didn't suspect enough despite the obvious.

In terms of production, Tenebre boasts an awesome visual department, just to show that Argento does have (or had) a keen eye on the artistic. I do notice the amount of white and/or light colors used for the film, a choice of lighting made to emphasize the brutality of the murders as they do get more brutal than the last. On that term, gore is rather restrained around the first act but as the film progresses, it gets messier to the point that it went straight on for the jugular and literally paints the white walls red. We also have the director's signature odd shots including close-ups and crane work that seems to give a macabre sense on the killer's presence and perspective of their murder spree.

Acting-wise, we're still treated to your usual Italian "theatre-esque" acting where everybody seems to be unusually high-strung and/or suspicious, but otherwise, the acting in Tenebre was by far the best among the director's works.

The progressive Italian rock band Goblin provides the film's soundtrack in another collaborative works with Argento since Deep Red and Suspiria. The band's score went ahead as still one of the most recognized musical piece in the sub-genre, showing a beat of prowess and grit, although there were some cues that seems off from the film's tone; while I do enjoy the film's theme music, I find it too honkey to have the same air of mystique and power as the themes from Deep Red or Suspiria. Still, I do find the rest of the soundtrack quite entertaining, with percussion piece "Flashing" and the hauntingly eerie Slow Cirkus being my favorites scores.

If there's going to be any flaws, I would say it's the pacing; while it's a common rule in viewing a giallo that one has to be patient, the way Argento directed the flow of this film had us running with a rather slow middle act where a suspect was murdered, leading our main cast to start their investigation from scratch. I'm not saying it's boring, just that it could had used a trimming in the editing room, so we wouldn't get too lost with the lengthy dialogue. (The last act, though, was kinda worth the wait with its crazy twists)

Tenebre had a lot going for it: insane killings perpetrated by a clearly unhinged culprit, interrelationships of sex and violence, and mirror imaging of both victims and villains on how they both affect one another; if it wasn't for the lengthy running time and inescapable cheese factor getting in the way, it could have been another perfect horror classic for the masses. Nevertheless, horror purists are entitled to see this film at least once before judging Argento for his cinematic atrocities going around these days; one last look back to the good ole' days when he knows what made people tick and glued it to the plot. Back when we know why he deserved the title "The Italian Hitchcock".