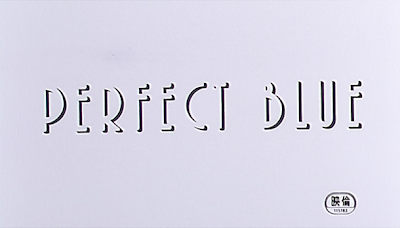 Japan really got it made as one of many powerhouses when it comes to animation as their scope of topic widely ranges from the comedic and innocent, to the weird and dark. In Satoshi Kon's directorial animation debut, Perfect Blue's a story of one woman's change, stress and people around her dying in ice pick murders.

Mima Kurigoe is a former pop idol and central singer of the J-Pop crew Cham. She is now taking a career in acting in hopes of broadening her image, but her decision to quit her idol career is met with vicious backlashing from fans, especially from an online stalker who somehow found a way to publicly post her diary.

Still, her friends remain supportive of her choice, eventually landing her a small acting role as a rape victim in a dark thriller film, Double Bind. The stress from her role, as well as the continuous negative fan reactions, soon begins to affect and blur Mima's line of what's real and not, as certain events in her life starts to mirror those from the Double Bind film. Adding to this issue are the strange string of ice pick murders that leave victims stabbed to death and their eyes gouged out. Could Mima had truly lost her mind from the stress? Or has somebody taken their fandom to a whole new and murderous level?

The film did a fine job establishing its central character in a sense of complete and utter realism; behind the curtains, Mima's an ordinary person who's prone to the stress of her job as well as her decision to move away from her idol image. The first third of the film essentially builds from this; attempt after attempt to do more for her life, Mima's bombarded repeatedly with hate letters, harassed in both real and fictional worlds as fans invade her privacy and she's reduced to exploiting herself under the chagrin of her manager to gather attention. More to her disappointment is the fact that her former J-Pop group is doing better without her. These scenes are hard to watch as it not only shows the plausible psychological trauma of someone who isn't used to these roles, but the emotional levity of it is really downing. At some point, the uncertainty of her own beliefs would gradually take effect and it was just a matter of time before the massive stress would really get to her.

Now, the second act is where the actual bodycounting happens; while most are done off camera, one or two murders showcase a level of brutality that, even for a Japanese animation, seems pretty disturbing. It's occasionally hard to make animated murder to have the same realistic effect as the ones done in live action, but the film's build and tone really help anchor the dread from these killings. One killing even went as far as editing in flashes of Mima in provocative positions during one of her photoshoots, a disturbing contrast of mayhem and lurid fantasy.

The film's take on psychological terror and bloody murders easily labeled it as an animated version of an Italian Giallo, murder mysteries done with a touch of horror. And as any gialli, the climax in Perfect Blue showed all the occasional trappings such as pseudo-revelations and bizarre twists, bloody killings and sexual imagery done in an expressionist angle.

Based on a novel, the original idea for this film was supposed to be a live-action film with multiple changes from the book. But due to budget (and a devastating earthquake around that year) the script was applied into animation, something Satoshi Kon would later continue to do with widely acclaimed anime movies such as a Matrix/Inception-esque Paprika and the heart-warming holiday comedy drama Tokyo Godfathers. But coming from this debut film of his, I can tell this man knows how to make anime films that cater to the adult audience. I would even dare say that this film has transcendent into a level of mature entertainment, without wallowing into the otaku culture Japan is partially known for.

For this, I find Perfect Blue to be one of the best examples of a creative take on a familiar grounding; while it may not appeal to the lot who prefer their cartoons to be more "fun", those who're willing to indulge to something maddening and yet beautiful, I urge you to see this title and lose yourself to its prowess.