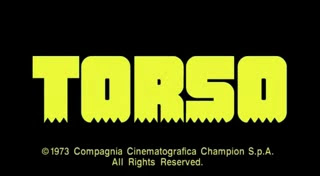 A serial killer is murdering local girls by strangling them with a scarf before gutting them and plucking out their eyes. Authorities soon notice that all the girls attended the same college, prompting them to warn everyone in campus of the recent slayings.

One of the students, Tina Aumont, thinks she's next because she believes she had seen the killer's calling card, a red and black patterned scarf that she recalls giving to her ex before they broke up. Frightened by this fact, Tina and her friends decided to leave for the holidays and visit an isolated country manor rested atop a cliff for them to relax and have fun in safety. Unknown to them, however, the maniac was aware of Tina's suspicions and seeing it's just a matter of time before she could recall their face, the psycho tracks them down and began killing off any possible witnesses and anybody else in the way...

Torso's concept of babes and blood is taken with a rather sleazy approach for its time as one would expect it to be. As its original title "I corpi presentano tracce di violenza carnale" (roughly translated "The Body Shows Traces of Carnal Violence") might suggest, the violence here is rather bloody, if not messier than what most gialli by its time would come up with, yet not visceral enough in the sense that they were upsetting. In fact, most of these killings are done away in artistic editing (such as an image of a doll's eyes being pushed in by a child's hand in place of the victim's actual eye gouging) with the only gory moment being a brief flash of a blade cutting open a torso and some savage dismemberment scenes that while reduced to a camera trick where the saw's actual meat cutting is hidden obscurely from the camera, a series of upsetting sounds of flesh, bone and metal stepped in for the actual visuals, leaving us a somewhat gruesome variation that works just as fine.

In terms of sleaziness, the film does provide a lot; the skin count for Torso is relatively high, with wide ranges of voyeurism and fetishes including a series of multi-partnered sex scene blurred in the opening, a bizarre gathering where everybody seems to be high and making out, and even a lesbian couple among the lead's clique. Incidentally, majority of the male casts here, may it be a major role or even as a plain extra, are portrayed as sexually repressed and intimidated, a notion that makes any red herrings among them as suspicious and plausible as our killer. Unfortunately, little of them made any strong assumptions, thus we can't really buy into thinking some of these men could carry out the murders.

In a way, Torso features a lot of slasher elements that will later influence the sub-genre in the 80s, mainly the fact that the film utilizes POV shots of the killer to hide their identity. The film's finale also pits a "final girl" against a deranged maniac whose reason for the murders has something to do with a flashback, a common practice slashers are known for since their popularity.

Despite all this, Torso is still breathes the air of a giallo, from multiple red herrings to crazy plot twists. As misogynistic and mean-spirited as it may be, Torso never fails to deliver the good thrills and spills; from surprisingly creative killings to nail-biting stalk scenes, the movie's an enjoyable beauty of a violent thriller, much of it giving a dab of horror but nevertheless as hard boiled as any of its kin, showing a perfect mix of frights and intrigue.The best scene coming from this movie would be its very own climax wherein a surviving lead, sprained from an accident beforehand, is forced to keep quiet and witness what remains of her friends being dismembered by the killer. It's tight in tension, beautifully shot and eerily done in near silence, perhaps one of the finest giallo moment in history.

Torso also boasts some great visuals as well as a sensual score by the De Angelis brothers; but with all these technical and directorial praises, the only flaw that this film have is that its mystery wasn't really that deep. Yes, it does ring into guessing the identity of the killer, but with most of the male red herrings hardly doing anything that would assume them being a ferocious murderer, it could have been anyone behind that mask. Then again, that does improve the reveal even if the killer's motive for the slayings are far-fetched and overridden, so it's not much of a damage in regards to the film's own flow.

Perhaps one of the best, non-Argento giallo to be released in the 70s, Torso's progressive story, lavishing shots and messy blood work is a sure win for all fans of any decent bodycount films. Highly recommended for horror purists!