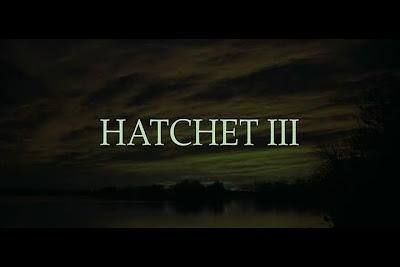 And so here we are again back in the swamps after three years of waiting from the last film. All those murky, slimy things that'll crawl out to bite you in the arse are out for the night again, but here in Honey Island Swamp stirs something, or someone, that everyone ought to look out for: the infamous legendary killer Victor Crowley! But wait! Last time we've left him, his face was smashed into a gaping hole and got a blastful of lead shot into it! So have we seen the last of Crowley? Apparently not.

Taking place minutes after the previous installment, Hatchet 3 has Danielle Harris reprising her role as Marybeth, a deeply exhausted survivor who just came back to the same swamp to finally finish off the hulking killer, but finds herself attacked no sooner by the faceless Crowley himself, somehow surviving overkill. After a brief struggle, Marybeth manages to topple him down into his own 6 foot long chainsaw, slicing the big guy in half down the middle, seemingly (again) ending him for real. Feeling triumphant, she then proceeds to walk back to town, with a shotgun and a piece of Crowley's scalp at hand, claiming the nightmare is over. But telling this story to the cops proves to be a rather questionable move as they dismissed her tale as delusions. Not that she seems to mind, though.

A clean-up operation is then sent out to the massacre site, hoping to find all the bodies of each victim, including that of Crowley's split body, and find some answers to this bloody situation. As night falls, we soon find out that Crowley's really all voodoo mojo, forming himself back in one piece and ticking alive again, not promising the same for anyone that he'll grab hold to.

It isn't long before the big guns are called for back-up and a SWAT team (with a leader played by Friday the 13th reboot's Derek Mears) gets called in to dispatch the threat. But as they all begin to drop off like flies, the sheriff's estranged journalist ex-wife (played by Caroline Williams!) finally decided to step in and gets a reluctant MaryBeth (and a guard) tagged along to grab something that may end the curse once and for all! But after all those previous attempts to end said curse, will this be any different? Or will history repeat itself and more blood will be shed?

Comparing this with the fun yet inferior previous installment, Hatchet 3 managed to bring back the same energy the first movie have, although missing a lot of things that made the previous two such a hoot; technically, the Hatchet series is supposed to be a throwback to old 80s slasher movies, which meant it's supposed to be cheesy, fast paced and very, very, very gory without relying on cheap CG. While Hatchet 3 kept the pace, it lost some of the morbid humor and the kills are very uninspired.
In the previous movies, the humor was on both the characterization of the casts and the scenes that happen right before they were killed, normally involving one or two cast doing or saying something awfully funny to relieve us some tension, as well as give a bit more character to them. That's kinda absent here, with only a few casts actually standing out and the rest merely for the picking. Thankfully, that didn't stop said stand outs to do something really worthwhile every now and then, including an awkwardly hilarious scene involving a Sid Haig cameo as a deaf, racist redneck who may hold the last remaining key on destroying the man-monster for good.

As for the kills, I'm standing in-between lines here; while the bodycount is still huge and the gore's as splashy as ever, it didn't do much to re-invent the story and nearly all of them are the same style of Crowley tearing people apart in twos, threes and quarters even. Even a notable encounter here between two horror-role legends, Hodder and Mears, who both played Jason Voorhees in the 80s and in the remake respectively, ended with little to spice up the fight.

But, issues aside, Hatchet 3 isn't a bad movie. Far from it really! Harris's character is still badass, though she did took down a few screen time in favor of a cult favorite Caroline Williams to take in some spotlight. (God, how I miss this woman!) I find it ironic that her character here, a journalist trying to prove the existence of Crowley, is sortah parallel to her media- connected role as a radio DJ in her (in)famous role as Stretch in Texas Chainsaw Massacre Part 2! She has a lot more spunk here so I'm not complaining on the lack of Harris. Kane Hodder's Crowley's still as menacing as ever, a little more of a serious man-monster here than a lumbering maniac that he was in the first two films, however, and the character's design really improved. There's more action so it's never boring, some fun surprises here and there, and it never lost it's momentum.

The ending's also very intriguing; now, I'm not sure if this is the last Hatchet movie, as Adam Green, the director of the first two and producer of this third, promised at least two sequels after the second, although he seems to be hinting this is the last recently. So if this is the final entre' to this film series, I'm cool with it, but the way this film ended is just one big head-scratcher for all of us as, not gonna spoil, it isn't perfect. Still, Hatchet 3 has at least the decency to end it with its head held up high and putting it all up in full circle. Sort of.

Overall, Hatchet 3's a fun, dumb slasher movie for the fans (dubbed the Hatchet Army) despite offering very little of the new. It looks bigger, badder and definitely bloodier, but it's all about Crowley in the end!