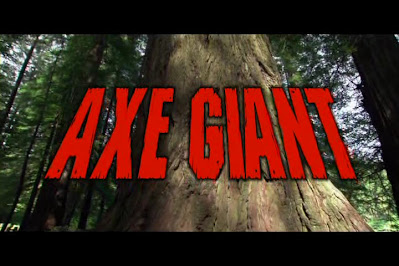 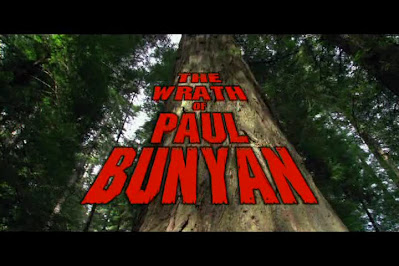 Coming from the director who brought you the scifi creature feature fest Mosquito (1994) and Spiders (2000) comes a giant monster movie in the likes you never seen before! A Slasher!

Some several decades ago, in what appears to be Old Timey-Whimey Western-y 1800s, it's winter and a small group of people are enjoying an outdoor barbecue, feasting on the remains of a huge ox. One of them leaves to the woods to get something, only to come back and finds his friends hacked to bits. The culprit? A deformed lumberjack who then proceeds to slice him in half through a saw mill in pure, horrible CG display.

Flashforward to our modern times and a group of five petty delinquents find out that their only alternative for jail time is to attend a special backwoods program under the supervision of a counselor and a sergeant. Though obviously not excited about this, the group still try their best to get along and enjoy their stay; but after desecrating an animal's grave, they unknowingly riled up a 15-foot giant mutant who is none other than Paul Bunyan himself! Angry (and, well, lonely), Paul sets out to seek the hooligans responsible for this, with bloody vengeance in his mind.

While generally terrible, Axe Giant is really more of a horror movie trying to poke fun at itself with an outrageous story and a cheesy approach, setting an aim to be a fun film for those who can learn to switch off.

The technical department here might be a set off for many; the special effects rely a lot on CG which is, looking at the quality of it, disappointing. One particular attack has us watching Paul lift up a woman from a cabin and you can tell how robotic the CG victim moves. Same can be said on a computer generated Ox that's a part of Paul's backstory, which would have made a cheap Animal Planet Special proud.

Some cruddy computer effects are also thrown in to the kills here, gore-wise and execution, but the results are still as imaginative and creative with its use however, enough to forgive at least some of the wreck. Besides, any movie that has a man cut down in half surviving long enough to distract and taunt a giant (only to be killed, of course) is a bad film worthy of our attention.

Acting is really stiff for most of these no-name inexperienced casts but, as I've mentioned, with the film's direction, it fits the film's charm nonetheless. There's this one scene where we're supposed to feel bad for Bunyan as he watches his ox buddy gets killed and eaten right in front of him, but the actor's "horrified" expression, plus the editing which had us intercutting between him being shocked and the hunters eating made me laugh so hard instead that I almost ran out of air and I had to step out of my room to get a breather. Thankfully we got a few genre regulars to enlighten us genre fans; Thomas Downey, a familiar face within the God-awful mockbuster-spewing DTV company Asylum, did a fair role as Sgt. Hoke, a hard-as-nails sergeant who's ready to make a living hell out of these kid's stay with them. And then there's the cooky, old doomsayer played by Joe Estevez adding up to the cheddar of the movie as a fun drunk-out hermit who knows a thing or two about Bunyan.
Speaking of which, the big dude himself is played by a guy in a large, bulky, latex suit; nothing much to say on his part as all he really did is growl his way through the cast, looking mean and scary, and lumber around pretending to be huge. (Which works, by the way) 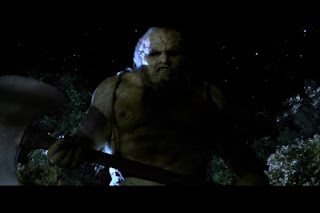