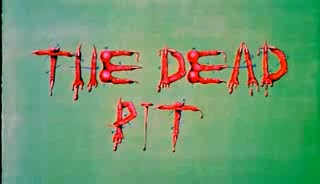 Before I went gaga over Slasher films, I was a Zombie fanatic first.

I recall all those times I was so fascinated with these undead guys that I drew a lot of zombie busts and designs. Those were good years, going for months eating chicken meat imagining them to be raw human flesh for immature fun (I was twelve. Deal with it) but due to my limited access to finding more zombie films, and the fact that I was a preteen boy who's allowances, when saved for a week, was just enough to buy just one VCD, my love for the sub-genre faded slightly through lack of experiencing any more zombie movies and it wasn't until I was old enough to go to college that I tried to rekindle it. I had my stroke of luck finding newer titles (those released post 2000s and early 2010s) but, since I was a little older then, my perception of what makes a good horror movie changed, thus I was kinda critical to the majority of the zombie titles I managed to snag. (Out of all of them, the only zombie titles I really appreciated were the REC series and the indie Dance of the Dead.)

The Dead Pit was one title that I kept on track for some time and I was intrigued from the fact that I had a hard time looking for it. Back then, I was aware that the movie was a zombie flick but I never knew I would find it under slashers as well, so my search for this title had gotten more interesting but finding it proved to be a task. Fortunately, a copy of it showed up available for online streaming not too long ago, so I took the opportunity to watch it and finally see this interesting looking title for the first time.

In The Dead Pit, a doctor named Ramzi have been doing vile experiments on still living mental patients and was discovered by another doctor named Swan. Disgusted by this and stressed on keeping his mouth shut about the eerie on-goings, Swan decided to put an end to Ramzi's madness and shot him on the head before walling in the mad doctor's entire secret room.

Twenty years forward, an amnesiac girl dubbed Jane Doe was found wandering on the countryside and turned over by the courts to the same hospital Dr. Swan is still working at. The more they try to figure her out, however, the more Jane began to dream about Dr. Ramzi, who seems to be returning back from the dead and letting her know all of this. The doctors first find her claims skeptical, but it wasn't long before Ramzi does indeed came back as a vengeful homicidal undead after an earthquake broke his resting place apart, bringing along an unholy legion of zombies which he controls.

I can't say I hated the film, but it does became a let down at some department, particularly the pacing and the plot itself; The Dead Pit focuses a lot on Jane Doe's torments around the first act as she struggles to understand her purpose and her reason for being being a clean slate. The way this is portrayed was a tad too cheesy and exploited for my part, with the casts being unlikably cruel and paces the movie slow with a lot of psycho-babble, all the while transitioning us with repeating dreams warning everybody that an undead doctor is coming "ala hot flashes, which obviously no one believed in until it was too late.

Another drawback here would be the killer in question; nothing really bad, it's just that after thirty minutes or so with nothing but scenes that would make a Women-In-prison movie proud, I was expecting more from the main villain than just a one-liner spewing demon/zombie hybrid with glowing red eyes and a bullet wound on his head. With all his glorious zombie killer swag, you would be rooting that there's at least some backdrop on his goal but no, he was doing his experiments cuz he just felt like killing and he suddenly have the ability to revive and control his dead patients just coz he can. I wanted to accept it as that but for a movie with a cool concept and a cool looking killer (not to mention making us sit through a lot of padding) the least they could do is make a memorable killer.

I may sound very disappointed but let me assure you, I'm not; despite the sluggish flow, the one-dimensional characters and the plot being being holed enough to rival a Swiss cheese, The Dead Pit wins with a wild card through special effects and some really cool zombie make-up. (Oh, and Cheryl Lawson being stripped naked via hose. I'm pretty some of you boys are into that) The zombie horde itself was fun enough to watch as they began to rip open heads and munching on them brains, and too seeing them fall into their own demise being melted with water. (Yes, it's the Neon Maniacs' long lost second cousins from their mother's side. Twice removed.) Plus, with a cheese factor set fairly high and some cool Dario Argento style cinematography, the movie will definitely have an audience.

Zombies and slasher films are not entirely new; whether it'll be one undead killer (like our old boy Jason Voorhees, or our newest addition, Stitches the clown from Stitches), or a bunch of them (them horde from Dead Snow, or even those rock-and-rolling, zombie rednecks from Trailer Park of Terror), the two sub-genres seems to mix well each other most of the time, but I guess it's inescapable to have some misfires. I may not appreciate The Dead Pit as a whole, but at least I can see effort and that has to count for something. Try it!

Bodycount:
1 male gets a lobotomy needle to the eye socket, scalp surgically cut open
1 male shot on the head
1 female gets a lobotomy needle to the eye socket, later seen with missing patches of flesh
1 male found with a dental drill on his eye
1 male strangled with belt
1 male had his skull crushed by zombies
1 male mauled by zombies
1 male missing, presumably killed
1 female had her skull crushed
1 male mauled by zombies
1 male seen dead
1 male had his scalp surgically cut open with bone saw and had needles ran into it
1 female missing, presumably killed
1 male immolated by bomb
total: 14
(Note: Presumably a number of mental patients and staffs may have also been killed off during the zombie plauge.)