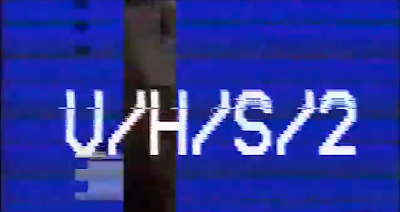 Guess how many times I actually re-watched this movie? Three times. Almost after I finished watching it for the first time!

It's really rare for a movie to out-do an original, may it be a remake or a sequel; if I recall correctly, the only movies that I believe out-did their predecessors were 28 Weeks Later (the sequel to 28 Days Later), The Blob (1988), Tobe Hooper's Toolbox Murders and, in my opinion at least, Hostel 2. Cases differ from movie to movie; some would do better cuz the original was met with mixed criticisms so they tried re-tweaking a few things (as in bigger looks, better actors, fresher mythology, etc.), others would be because it actually did well enough to put some thought into it, so fans of the first would have something to look forward to.

The original V/H/S was a mixed bag; the segments are uneven with their strengths, leaving us with an unsatisfied aftertaste once the film was over and hinder us from enjoying the entire movie as a whole. At least two segments there were worth the money, two others were so-so, and the rest were turds. Should we be expecting the same for V/H/S/2? Nope, in fact, let's just pretend V/H/S doesn't exist and consider this the true V/H/S movie! 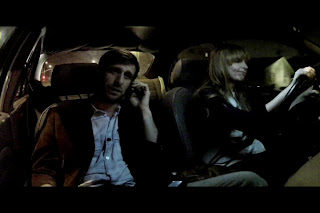 Originally called S-V/H/S, which sounded a lot cooler until they decided to change it in case a third movie is in talks, V/H/S/2 outdone everything the first was trying to do, starting with its wrap-around titled Tape 49, where we follow two private investigators looking for a missing college student last seen inside his own house. The two manage to break in and find the abode a mess, littered with VHS tapes, VCRs and TVs. While one checks out the rooms for some clues, the other was left to watch the tapes in case something recorded there can help. What improved here compared to the one from V/H/S is that this wraparound explained at least a bit of what's going on. It actually hinted some of mythology behind these tapes, something supernatural and rather organized as there maybe more people out there collecting these recording and getting affected by whatever force lingers in each tape. The idea is a good build compared to the first movie's and it's still bizarre enough to creep us out a bit, with an ending shot that is graphically comic. 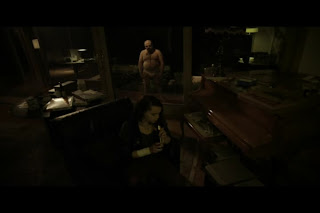 The first of the four tapes is titled Phase 1 Clinical Trail, about a car crash survivor receiving an experimental robotic eye that records whatever he is seeing as a part of the eye's trial testing. However, this also leads to the man seeing murderous ghosts that are getting more violent the more he notices them. A bit scifi-ish but it's a smart variation of the typical haunted house plot with a slightly convenient but creative reason to as why the character is recording all this. It could have worked a little better if it was longer as it did create a pretty interesting idea of artificial organs as a way to see (or hear) ghostly apparitions, but the quick scares and the tone of the segment was a good start for the movie. (I also love the ending in this one, too! Real nasty work!) 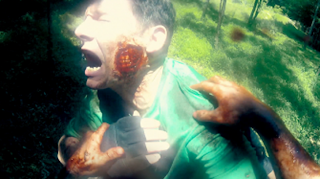 A Ride in the Park, the film's second tape, had us following a man taking a bike ride around the woods while wearing a "Go-Pro" cam on his helmet, only to encounter the living dead. The twist here is that, after a few minutes of said encounter, the man devolves into a zombie himself and we soon follows his gory search for fresh meat, which means bad news for a nearby children's birthday party as the now infected man joins the rest of the horde for an all-you-can-eat flesh buffet! The short is a mix of the old and new, often than not we do have mockumentary/found footage style zombie films but not one that was done through a zombie's POV. The gore here is awesome, a lot of cannibal scenes (one of them I found extremely funny), plus we got some great shots of first person injuries to an undead. (The "hit and ran-over" was really cool) The only thing I felt a bit awkward with was the ending, where we get to see some "humanity" in the zombie; not that I don't like it, it's just a little rushed, but overall this segment brought me back some love for the zombie sub-genre. 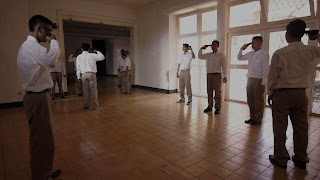 The third tape is probably the best of the bunch; Safe Haven has a documentary crew doing a piece on a strange Indonesian cult suspected of doing taboo practices such as child rape. Things go from intense to balls-out crazy when members begin killing each other, themselves and the crew one by one, in one bloody rampage to the next. Then comes strange births, spontaneous combustions, zombies walking and singing, and even the arrival of a horned god. It started like an ordinary killer cult movie, but it soon becomes this crazy climax that I can't even explain how messed-up it was. With all that gory and strange things going one left and right, you can't help but enjoy this unrestrained piece of mayhem by the time this shit hits the fan! 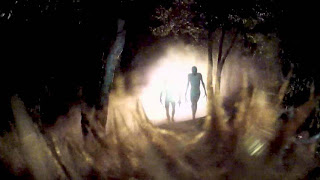 The last of the bunch, which is also my personal fave here, is called Summer Party Alien Abduction. As the title suggests, it's a simple story of a group of youngsters playing a prank on one of their friends' older sister and her boyfriend when a horde of Greys (or plainly aliens for you non-SciFi folks) arrive and start abducting them, one victim to the next. The short is quick in pace, with well executed villains making quite a show by keeping them obscured by silhouettes and strobe-light effects. (Even freakier when we get a good look at them Those large gaping mouths unnerved me a lot) The whole short is shown through a camera attached to a small dog so, in a way, this really help built the menacing tone of the segment as we see it through various angles, much to obscure the events further, and it actually helped focus on each of the character in just one POV. For some reason, many considers this the weakest of all the segments and I still yet to understand why, but for me this is one freaky found footage with an equally haunting ending.

So with all of these segments showing more strength that flaws, V/H/S/2 is a rare anthology where in all of its segments works. It's still far from perfect, as some of the shorts have their bits of cheesiness and plot holes to their lackluster writing, but comparing this with the first movie, it's a spiritual transcendence in terms of tone, humor and, yes, scares. I'm just glad that my hype for this movie wasn't for nothing and I can really recommend this to anyone who's looking for a new horror anthology to enjoy! (Plus a head-banging ending montage to boot!)