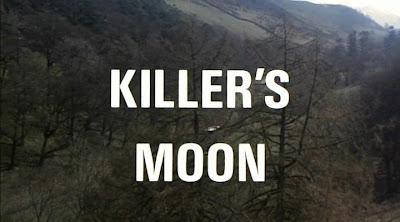 To watch or not to watch? That is the question these days when it comes to ultra rare movies.

There's always a reason why a certain movie's so hard to get by to the point it's rare: it's either poorly distributed due to a ban or bad marketing, or it could also be that it's so awful that the market just refuse to sell. Killer's Moon is one of the few titles that was (un)lucky enough to be added in the Video Nasties list back a few decades ago, so should we defile this movie's final resting place to catch a glimpse? Or just let sleeping corpses lie?

In a nutshell, Killer's Moon is an English exploitation of the bizarre kind as it mixes slasher conventions with the philosophical talk of ethics not quite different from the ones found in the cult classic A Clockwork Orange; a busload of choir girls had their trip cut short when their bus die out with a bad engine but was fortunate amount to find a conveniently secluded hotel in the middle of the woods and was allowed to stay in for the night while their bus driver look for help.

But unknown to them, a quartre of escaped mental patients who all went through an experimental therapy, making them believe that everything that they're experiencing right now is nothing but a dream; thinking that they're free to do whatever they please without any real world consequences, the four loons began a spree of unspeakable horrors, starting with mutilating animals before murdering the girls' bus driver and their generous hosts, and then harassing said girls. Just as it seems the girls are in a no-win situation, a duo of campers residing nearby had decided to help them escape and try to survive the night in one piece.

Idea-wise, Killer's Moon was a good film with a lot of misfires with its script and talent that dragged the film down in more ways than one;  for example, see if this infamously horrid exchange coming from one of the girls who's talking to a friend who was raped sounded right to you?: Look, you were only raped, as long as you don't tell anyone about it you'll be alright. You pretend it never happened, I pretend I never saw it and if we ever get out of this alive, well, maybe we'll both live to be wives and mothers. Ten to twenty years later, said raped girl will bear five children, beat them with a whiskey bottle when she's drunk, sleep with men every night, and probably will die snorting coke. Yep, nice advice, girl, but no. Strange thing even, these script re-writes was made by a woman...

Even stranger, the film juggles from breaking slasher film conventions to actually applying them, which can be a very odd experience. The tone of the film is almost psychological and yet, all the shocks that they do here are more of exploitation than twisted philosophy. The rape taboo is a little more controversial with themes of pedophilia as the girls are supposedly of young age and they're not hiding that fact with those uniforms, something a bit gutsy for the film to take. If anything, Killer's Moon felt most like a slasher film when the killers were outside the house but once they broke in, the merry band of misfits instead kills those around the girls and save them for menial labor, with the rest of the movie shifting tone to a rescue-type of thriller at the last act.

As much of an oddball this was, at least some of its silliness did work in an unintentional manner, such as a teacher who survived the ordeals by fainting three times all through out in separate occasions (with the villains leaving her alone), a dog coming back with a vengeance to kill off a loon who hacked off one of its legs (I see a The Hills have Eyes influence?), a victim burning to death with their clothes remaining intact and hardly burnt (!), and a camping tent that looks small from the outside yet huge from inside. (possibly a TARDIS with a damaged cloaking function) It's these strangeness that somehow made the viewing at least more bearable, especially if the rescue-climax itself was hooky fun.

I could say Killer's Moon is the kind of movie that a selective few can enjoy; after all, it does managed to keep me watching from beginning to end despite the bumps along the way. If you enjoy LSD ridden story-telling yet with a bit more classy feel to it, then Killer's Moon might worth a rent from the likes of you! Everybody else, why don't we all meet at the Korova milk bar and have a cold moloko on me?