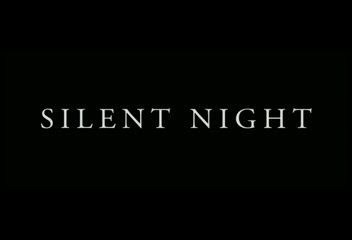 Ah, Christmas once again! Time of joy, love and various overpriced toys; I've done my Christmas shopping yesterday upon writing this and what else to make my day, other than a collected edition of Agents of Atlas comics at a discount price and my boneless buffalo wing meal at the Old Spaghetti House, than seeing a movie of a different festive taste. Something horrible. Something mean spirited. Something like Silent Night (2012)?

While remaking a cult classic like Silent Night, Deadly Night (1984) is a really big leap for anybody to accept, but I kept my expectations low; looking at every horror movie we have recently, anybody can get more or less get away with anything, whether's hardcore sex, violence or subject matter, so what if this movie's gonna be about another killer Santa? We have dozens of those already! That being clear, what's left for me then was to see how good of a slasher movie it is and whether it's worth the wait and the money.

Little less of a remake and more of a movie of its own standing, Silent Night is about a masked loonie in a Santa get-up loose on Christmas Eve, killing every "naughty" people he sees in a small American town. Hot on his trail are the town's police force, including Sheriff Cooper (Malcolm McDowell) and Deputy Aubrey Bradimore (Jamie King), but in every small town celebrating Christmas Eve, there bounds many in the red suit, so it's only a matter of time to point out the real killer Kris Kringle before he murders more and make this silent night deadly...

Hailing back to the golden age of 80s slasher, Silent Night is pretty by the numbers; murders are plenty and thankfully gory, the cast is likable in varying strength, and it's paced perfectly and crazily to avoid any boring scenes. We got foul-mouthed brats, nude photo shoots, a pervy preacher, and even not one, but two, count them! Two white-wash Santa with a deep hate for Christmas! No wonder these boys and girls in blue are having a hard time pinning down the real culprit! It's a darkly comic backlash to what Christmas is usually about, but bless it, they made it fun, amping the nihilistic tone of the original Silent Night, Deadly Night, while keeping the humor and irony of all things.

The murders here are exceptionally brutal, I'll give you all that! We got some nods to the original film such as a familiar looking antler impalement and too a tribute to the popular Garbage Day meme; the rest are a creative variety of classic  and badass kills, ranging from your usual knife stabbings and fairy light strangling to death by iron knuckles and a mean improvised flamethrower! Best of all, it's rarely CGed and even some where, it's only to enhance the practical effects, even if some scenes ended looking a tad too fake. (An axe thrown and some hooker falling down from a building in slow-mo, just to name a few)

Now, the casting is something up for the fans. Being a modest fan of Malcolm McDowell, I'm glad he is given a role that's quite a scene-stealer, which might be a good or a bad thing for you all depending on your take on the man as his instances to go a little over the top would either make you laugh or shrug. Jaime King also played her character straight enough for my liking, making the role a modest one that I can personally root for. I'm also pleasantly surprised to see Ellen Wong here as the police station's quirky receptionist; last time I saw her, she played the 17 year old lovestruck Chinese Canadian ninja groupie Knives Chau from Scott Pilgrim vs The World. Then there's Donal Logue as a Santa with a lot of personal issues with the holidays, giving out all the bad from the good of this festive season, all the while being a witty asshole. The rest are good, just good, while some could use a little more work.

A Christmas cookie for all who loves a good holiday slasher and perhaps those looking for a sequel that pays more respect to its predecessor rather than overthrowing it, Silent Night is a fun watch for that time of the year. Devilish humor, splatter worthy gore, great production values and some well acted parts, all in all a slasher flick that works every department just right, if not a little flawed, but trying its best. Best to enjoy this flick on its own rather than a "remake".

Bodycount:
1 male electrocuted with fairy lights
1 girl gets a cattle prod to the chest, impaled with fire poker
1 female found rotting in pieces
1 female hacked with a scythe through the gut
1 male gets a scythe to the groin, killed
1 female has leg chopped off with an axe, shredded through woodchipper
1 male stabbed to death with kitchen knife
1 female set ablaze with improvised flamethrower (flashback)
1 male strangled with fairy lights
1 female impaled through deer antlers
1 male had his head split in half with an axe
1 male shot on the head
1 male gets a hammer to the eye
1 male set ablaze with flamethrower
1 male found disemboweled
1 male pounded to death with iron knuckles
1 male shot, set ablaze (flashback)
Total: 17
Posted by Kaijinu at 3:41 PM