Naughty People Have Rot for Brains: The Present (2005) 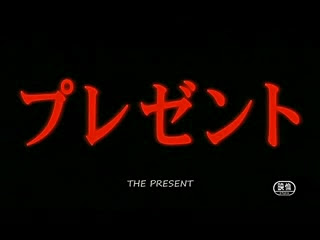 I stumbled upon this J-Horror in my search for another Killer Santa flick, and well, you know J-Horror's not gonna make it as subtle as possible.

Kazuo Umezu's Horror Theater is actually a series of 50 minute short films with varying level of cheesiness, creepiness and exceptional low-budget; while some shorts are terrible in terms of execution and/or storytelling, The Present was one of the few titles that made the low-budget work with a proper amount of shocks, laughs, good gore and an easy to follow story.

We open with young Yuko excited about Santa's midnight appearance. Though a little rattled about a nightmare she just had that night, her parents assured everything's gonna be okay and Santa will be there soon.

What happened that night was never been clear, as we go head long to a few years later, as we join the young adult Yuko celebrating Christmas with her loud, brash and annoying friends, one of which just happens to be a guy she's eyeballing. When a simple trip to the bar was rendered boring, the gang decided to pack up and spend their night at a fancy mansion-like hotel. There, they found their night of possible fun and games turned into a horrifying nightmare when a vengeful Santa Claus decided to get back the presents he gave, and he's doing it with a nasty chained blade and a pack of carnivorous reindeers!

As a slasher, The Present managed to dish out what matters in the sub-genre, mainly gory kills and some sleaze. While it's short running time had us going through a rather small bodycount, and a fast-paced execution of the story, with rather almost all of the character hardly fleshed out. Among all, the only cast this movie seems to focus on was the character Yuko, whose sudden transition from a jolly child to a sullen adult was a probable reason to why Santa is after her with most anticipation.

On the production department, The Present is an okay when it comes to the gore  and some practical effects; though I find somebody bleeding to death from an arm stump with the resemblance of a broken beer keg seems beyond believable, the non-CG effects were fair, featuring some sticky red innards, folks sliced in halfs or quarters, and plenty of shocking close-ups. However, the visual effects kinda sucked; I find those scenes involving Santa's bladed Christmas star quite laughable when it go all Matrix-like, Slow-mo and all! This is actually the only scene in the film that used the most visual effects, so I guess we can be thankful at least for that.

In your typical J-Horror shock/cringe, we also got one heck of a last minute weirdness and twist; not bad by means of making a quick jab at us slasher and splatter fans, with our fascination for all things mutilated and dismembered.

The Present is, by all means, a J-Horror flick trying to be an American slasher; while it have many of the usual suspects right, the overall feel is definitely your standard Asian horror in terms of weirdness and theme. Not a bad movie for this time of the year, and a definite try for any Killer Santa fans out there!