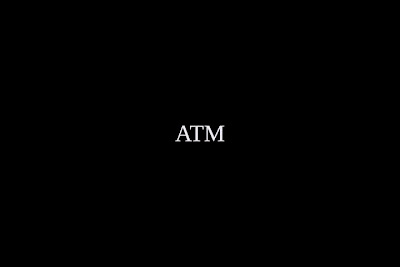 This is an interesting premise; three bank personnel get stuck inside a nearly abandoned carpark ATM booth during Christmas Eve. Why? Cuz a hoodie killer is out there watching them and just had killed somebody to prove he's serious about it.

Let's count that: three adults. One killer. In the middle of the city. How hard can it be to stop this guy?

So that's one point down for this mediocre thriller and sorta slasher movie from the guys who wrote the equally mediocre (for me) Buried (2010); the rest of the movie's downfall is, well, I never quite got that engaged in the situation. If there's anything, I'm rooting more on seeing the killer snuff them all out since he's probably the only one with a brain. Or half a brain. (He came to kill people without any weapons. What if one of these guys had a gun?) I mean, I can tell that they're a bit weirded out when this guy just popped out of nowhere and just stares at them, and even more freaked out when he decided to bash a guy's head against the pavement, but I've seen a lot of opportunities for these guys to just run, gang up on him and live a happy life for the next 40 years or so. But no, they're freaked out by a guy in a partially menacing hoodie, who did nothing but stare and kill with things he's just lucky enough to have cuz these guys leave them behind and are too scared to go back and get it from him.

Pros? Good acting, especially from Josh Peck, who I respect a little bit cuz I'm used to be a fan of the Nickelodeon teen sitcom Drake and Josh. I also have to keep points for the killer, who looked rather cool in that Urban Legend (1998) - inspired hoodie, as well as the movie's devilish twist ending which at least explains why this killer hadn't moved inside the ATM booth after all this time.

Oh yeah, definitely skip it! If you want to shower yourself with a C-flick that serves no purpose but to "thrill" you with cheap, logic-less plot? Here's you cup of tea and have fun. You the rest? Find yourself a classic B-flick and just do better with yourself!

Bodycount:
1 male had his head bashed repeatedly against pavement
1 male brained to death with crowbar
1 male garroted
1 male gets a screwdriver to the gut, crushed by an incoming car
1 female hits her head against counter
Total: 5
Posted by Kaijinu at 11:19 AM