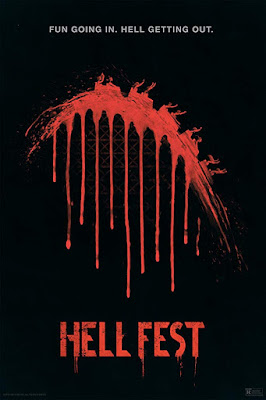 Sometimes, a slasher flick doesn't need a lot to be fun.

Have a killer run around some place, stalk and kill a few people creatively, fight a surviving girl (and/or guy), give us one last scare before the end credits roll, do it all right (or at least okayish) and you have yourself a back-to-basic dead teenager flick that may not look much, but it definitely could have been worse!

This is what Hell Fest is, a bodycounter that follows the staple niche of classic slashers like John Carpenter's Halloween (1978) and Tobe Hooper's The Funhouse (1980), following the exploits of a small group of teenagers having fun at the titular neon-bright horror themed Halloween event, unbeknownst to them that a masked hooded figure decided to crash their little adventure and begins stalking and killing them one by one. There's no deeper play into this plot, just another group of kids with a slasher trailing behind them, but the modest and simplistic approach certainly has its charms.

Most of the characters has a genuine realism to them, may it be from our obvious final girl Natalie (Amy Forsyth), her best friend Brooke (Reign Edwards) or her budding lover Gavin (Roby Attal). We do still get loose cannons like Bex- Taylor Klaus's character Taylor who's an avid horror junkie with an energetic passion of a 12 year-old kid, or obvious meat throwaways like Matt Mercurio and Christian James' random love interest characters, but you can tell these guys and gals just want to have fun and their interaction with one another felt really close thanks to some decent writing, a well-timed pacing to allow some development and passable acting from our teen casts. 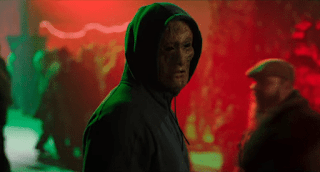 On the other end of the spectrum, our killer looks fairly okay. Their get-up is nothing too extravagant, just a Halloween mask and a hoodie, but their body language reeks of a real creeper, a predator toying their prey before going for the kill, which either can go tame and simple or brutally bloody, two of which murders going full gore on us out of nowhere. By no means a memorable killer, but passable.

Another thing I came to love about Hell Fest is the theme park setting. While this isn't exactly new with the likes of the aforementioned The Funhouse already took a stab on the fun park backdrop, as well as other fairly fun titles like Dark Ride (2006), but this is one of the few rare occasions where in we see our casts enjoy the place, as well as see the place enjoy scaring the casts back in good fun. Honestly, this is one of the best looking set-piece for a slasher flick, with top-notch creature designs for the park's actors and a lot of grand-looking rides and scare houses for our characters to try out and fall victim to, may the threat be real or not. It's this great set-up that gave the story a bit of an advantage as it made it hard not to picture a lot of the horrible things happening around as fun and games until shit hits the fan, so there's a good sense of tension once in a while. 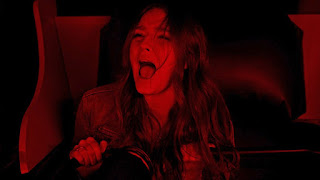 Scares, sadly, isn't Hell Fest's strongest point as seeing it relies on classic slasher movie trappings, some of the frights (both intended and false) and a few supposed intense moments can get a bit predictable. We can tell the authorities aren't going to be any help within this movie, or that the gang will always find ways to split up, as these are the same cliches used on hundreds of other titles before and Hell Fest did little else in terms of variation on these tropes. The movie does throw in an unexpected turn or two, such as who bites the big one early or the subtle but random (or grim, depending how deep you read between the lines) reveal of the killer's identity, and it can be shocking, brutal and unnerving when it needs to be, so the lack of any more twists on the slasher skeleton could have been remedied more.

Still, for a paint-by-number slasher, it's hardly boring even when you expect some of the plot turns. With a likable set of characters, some great stalking and murder scenes, and a subtle understanding on the basic flow of a good slasher story, Hell Fest is a watchable flaw that's entertaining in its simplicity if it hits you in the right mood and mindset. No means a new classic, but a good timewaster nonetheless.