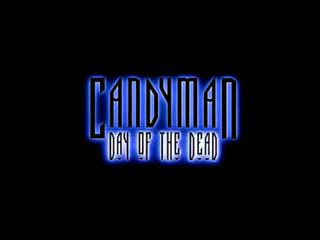 Anybody else noticed how more the Candyman franchise go slasher on us, the shittier it gets? Damn.

So unless you're new to the horror game and hadn't heard of this 90s gem, Candyman is a 1992 cult classic psychological slasher movie based on a short story by Clive "Hellraiser" Barker, starring the booming voiced Tony Todd as the titular hook-handed villain who appears to kill whoever says his name five times in front of a mirror, as well as those who tries to disprove his existence. The movie's success and popularity within the horror community meant sequels and most of these (and by most I meant all two of them) are a retread of the original only with an emphasis on the villain's origins and bloodline, which revealed he was a painter back in the 1890s and has committed the sin of falling in love with a white woman and impregnating her, thus resulting to getting lynched and mutilated by a racist crowd as punishment.

This meant we now have white girls who are supposed to be Candyman's blood descendants that, for reasons that vary in each sequel, he has to kill. In all honesty, this franchise could have survived without dealing with any of this. Really.

In Candyman: Day of The Dead, Caroline McKeever, the now (mathematically impossible) adult daughter of Kelly Rowan’s character from the last film and the Candyman's great-great-granddaughter, owns an art gallery where she holds an exhibit featuring artwork painted by the hook-handed legend himself when he was still alive. She does this to change the perception of the Candyman tale, to focus more on the tragedy that befell on the man who will eventually become the writing on the wall,  the whisper in the classroom. A part of this exhibit, of course, includes invoking Candyman himself as an act but this (surprise, surprise) doesn't sit well with the legend himself.

Now back in the world of the living to do murder by bees and hook, Candyman's mission this time is to have Caroline to be his victim and he does this by not only killing those around her who doesn't believe in the legend and make it looks like she's responsible, but also kidnapping her boyfriend and threatens to kill him unless she offers herself to the Candyman's hook. Obviously, Caroline isn't going down like that, so she races against time to find a way to stop him before the bodycount goes higher.

Candyman: Day of the Dead barely holds itself together as a sequel to what was a deep yet creepy slasher about the nature of legends and racial politics. The characters are dumbed down to your standardized teen victims, the plot is needlessly complicated thanks to all the bloodline drama and the then-intriguing look into racial appropriation is messily shoehorned in, this time dabbling into Latino culture and their holiday Dios De Los Muertos (Day of The Dead), hence the title. Candyman here even fails to be all that terrifying, with his collection of dialogues making him sound so needy and overly dramatic with his beckoning for Caroline to be his victim, all of which doesn't match well with the fact that he's killing people with friggin' ease, this including every member of a random Candyman BDSM cult. (Apparently, that's a thing.)

Other mess to expect is a very uninspired final girl whose best moment involves talking to an egg, and worst moments involve within the fact we're supposed to be rooting for this bland excuse of a character. In fact, the movie's tone is damn stale and joyless, something that's kinda excusable if the plot has depth but the high bodycount, gory kills, lack of Philip Glass’ amazingly haunting soundtrack and retreaded cheap story say otherwise. Candyman: Day of The Dead is really nothing more than a sad end to what could have been a rich franchise and a solid reason to pretend that no other Candyman movies exist except for the original. What else is there to say, really? It's a laughably bad film, a laughably bad sequel and nothing more.