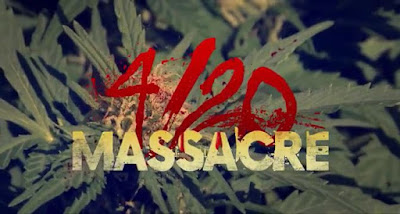 When I first read about 4/20 Massacre claiming itself as the first "stoner slasher", I first thought No, it ain't. Have these guys seen The Tripper (2006)? In case they haven't, they should! It's quite good!  and then I pictured another stoner comedy clashing with your typical dead teenager flick. Thankfully, the latter wasn't much of a case for 4/20 Massacre and I'm actually quite alright with that.

The film opens with a pair of backpacking bros out in the woods and stumbling upon on a pot farm. As most 20-somethings in a horror flick, the boys are rightfully excited about the find and start hauling up the hash stash when suddenly, a clawed figure in a ghillie suit comes up right behind one of them and slashes his throat. High from tasting the weed and shocked from what he just saw, the surviving backpacker makes a run for it, unknowingly starting a long day of trouble and bloodshed for just about anyone in the same woods.

In come our protagonists, a lovable gang of five girls on a camping trip over 4/20 weekend to celebrate a friend’s birthday. Along the trail, they encounter a beer-guzzling park ranger who warns them not to go off into the hills due to hostile weed farmers (a clue?), disrupt a hunter from killing a buck by offering him some weed, and run into our surviving backpacker who handed our girls the stash of marijuana he stole in hopes of escaping his pursuer.

It comes to no surprise that our backwoods stalker eventually arrives to kill off our casts, slaying the throwaway randoms first before making their way to our girls. Along the blood, guts and huffed cannabis, we get funny conspiracy talks about the true meaning of "4/20" from the resident stoner girl, random discussions about philosophy and an adorable (and wonderfully well-acted) coming-out scene as one of the gals reveals her true feelings over a friend she's been crushing on for a long time. Suffice to say, 4/20 Massacre did a whole lot of right and more as a slasher flick.

As far as scripting and acting goes, 4/20 Massacre did pretty well establishing its main female casts, giving each of them a pretty distinct and likable personality even if the direction gave about half of these girls more grounded development than the rest. Though some of their overall shenanigans were expected from this type of movie such as smoking recreational drugs and "experimental sex" (all of which, of course, soon leads to their doom), there's a slight modesty, sweetness and depth to these moments that makes them rarely boring, often funny and fairly enjoyable to watch, henceforth making their demises all more cathartic.

And speaking of demises, the kills are wondrously savage, messy and brutal despite the odd placement of CG blood splatter, seeing the practical gore effects used here have enough grue to satisfy one's bloodlust for slasher gore. The pacing between these murders and the character scenes is well timed to build around one another, cleverly starting us off by snuffing out the random encounters before getting into the real meat of the massacre.

The killer, despite their intimidating silence and brutality, is an odd one visually speaking, looking an awful lot like a cryptid consisting of dreadlocks for hair, sharpened dead branches for claws and an affinity for weed. (Yes, the killer occasionally goes "huff, huff", too! Kinda kills the seriousness of the murders at times, but the damage isn't too damning, honestly) Heck, there's even a scene of the killer simply running through an opening on the woods, somewhat resembling the famous Patterson–Gimlin film on orange daylight tint. It's a strange choice of get-up for our murderer, but one that has its moments and it does stand out in a good way. The only thing I truly have mixed feelings about our killer is that their motive behind the murders comes across as cliched seeing we already have twists like that from earlier slasher movies, but I can't dismiss it completely considering how it still fits with the movie's tone and direction.

Well shot, edited and beautifully composed as well, 4/20 Massacre is a lively and engaging low-budget modern indie that I, again, am glad didn't choose to spoof down its own story with overblown stoner jokes and nods to cannabis culture. Instead finding a clever way to incorporate its talk of weed and depiction of the pot-smokers' holiday around a workable slasher plot, it's all the sensibilities of a themed indie backwoods hack-a-thon, with a little slice of depth and a good amount of tension once the killing gets going. Watchable and exciting, 4/20 Massacre is good enough for me!