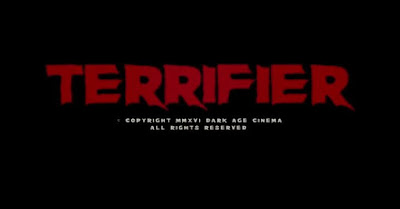 I recall seeing Art The Clown all the way back in 2008 around my early college days, through director Damien Leone's early short called The 9th Circle. After that, I saw him again after stumbling upon Leone's Halloween-themed slasher short Terrifier (2011) on Youtube before getting my hands dirty with this clown once more and picked up the anthology horror flick All Hallow's Eve for 2013's October viewing, in which the movie collected these two shorts and packaged them with a third Leone segment, as well as a haunting wraparound with a gruesome conclusion.

Needless to say, I am fascinated by this creature. I love horror clowns, may it be a killer in face paint or a child-eating demon that possesses anyone that wears its skin, so long it is done right and Art is more than done right: he's almost a terrifyingly perfect blend of creepy and intense, horrifying and cheeky, and ambiguity and predictability, much like this feature length terror featuring the clown himself in a main villain role.

The story is simplistic enough. Two party girls, Dawn (Catherine Corcoran) and Tara (Jenna Kanell), were walking home from a Halloween get-together when they unfortunately caught the attention of Art, who just happens to be literally walking by. Things go seriously complicated when Dawn drunkenly flirts with Art and dragged Tara into the mess, much to her friend's annoyance and worry. It isn't long before Art starts to tail them, eventually ending up in a nearly empty building being pest-controlled where things finally go deadly as the clown shows off his homicidal nature and anyone unfortunate enough to be around is a target to his madness.

Basically, Terrifier is a star vehicle for a horror villain and the brand of "shock violence" he can dish out. Plot development is stripped down to the very bone of a slasher flick which is basically just stalk-and-kill, hence all other characters are simplified to nearly "future lamb chop" levels, prone to making bad decisions after bad decisions or simply having the worst of luck being in the wrong place at the wrong time. In fact, no any real motivation was even given for massacre apart that our killer clown can (and he definitely can) do it, so we are practically left watching one long excuse to have a random face-painted slasher showcase gory kills for us in a very unforgiving pace. But as far as excuses go, this film does a damn well job making that frighteningly and disturbingly work.

It's kinda rare nowadays that a slasher film with a plot this barren can make its kills so uneasy to watch but this movie managed. Much of what makes Terrifier an intense and terrifying viewing is the details it puts to each murder in which, albeit silly in set-up, the amount of gore and practical effects done are phenomenally carnal and near realistic, camera and editing hardly shying away from the onscreen brutality and gruesomeness. Art's attitude towards the violence he unleashes on innocent people further boosts the creep factor of his massacre, often tinted with a mocking and playful tone that somewhat forebodes a sense of hopelessness for his victims as it hints this isn't our killer's first rodeo.

On that note, I like how Art The Clown is an intriguing mix of the mute-type slasher villains and the wisecracking ones, relaying most of his twisted psychopathy and insatiable sadism through eerie mime acts possessing a lot of dynamics and emotions, mostly of grim joy and random insanity. A certain "drag" scene is a full testament to his character, spending an uncomfortable amount of time wherein Art plays around with a victim's hair and skin (in a manner you can only see to believe) while being partially nude himself, stalking another victim in the meantime. He is also willing to push the limits and play dirty just so he can deliver a murder one way or another, sometimes breaking away from standard slasher conventions most horror fans grew accustomed to. Needless to say, this is one clown you definitely wouldn't want to meet in a dark alley. (Or force his way into your home)

At a technical level, the movie tries to recapture the weathered look and feel of a lost 70s/80s slasher, although set in modern times. The tinted lighting greatly emphasized the dynamic violence and bloodiness onscreen and the cheesy dialogue and acting are a decent homage to those bygone days of mean-spirited grindhouse bodycounters where exploitation is far from uncommon. These attributes gave the movie a bit of a stylized timeless feel, which is an advantage for itself seeing its sheer focus is more on the kills and barely anything else.

The only problem with Terrifer is whether its simple slaughter-filled direction will work for everyone and, truth be told, it certainly won't. Those looking for more meat in a slasher story around the grounds of character and plot development will most likely find this film too simple and carnage-centered to be enjoyable. Little is revealed about our villain, may it be his origins or, again, why he kills, and I'm sure this will annoy some audience who're egging to know more about the madness they just saw.

Of course, if you just want a very basic horror movie about a clown on a very gory killing spree then Terrifier is a great movie to have around. A shocking piece of relentlessness made simply to shock and offend the strongest of stomachs and hardest of nerves, it's a movie bound to be a cult classic among horror clown enthusiasts, gorehounds and slasher fanatics. Perhaps, even, a good viewing among many others for a certain Fall holiday.

Bodycount:
1 female had her eyes gouged
1 male found decapitated, face mutilated
1 male repeatedly knifed on the face
1 female sliced in half with a hacksaw
1 female shot to death
1 male knifed on the head and had his throat sliced, head ripped off
1 female found scalped and flayed, dies from injuries
1 male had his head stomped
1 male strangled, killed offcamera
Total: 9
Posted by Kaijinu at 5:59 PM