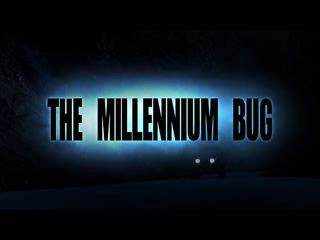 As a kid, I love monsters, and I still do. As a teenager, I love slashers, and I still do. Put these two sub-genres together in one flick and you'll have one giddy adult me trying it out, hoping to all gods and devils in existence that I'm not wasting another hour and a half of my life with a dreck my gut warned me not to watch. Thankfully, said gods and devils (and my fat gut) was on my side when I finally decided to see The Millennium Bug, a modern cult classic in the making.

The story starts a few hours before the year 2000, a time where more impressionable people feared the possible apocalyptic breakdown of society that'll be the cause of a computer bug called Y2K. Hoping to escape this nonsense as well as spend some quality time together, the Haskin family – teen daughter Clarissa, her father Byron, and her new (young) stepmother Joany – drives to the mountains of Sierra Diablos for a late night camping trip.

Unknown to them, the Crawfords, a hillbilly clan living in that very mountains, have grown tired of having deformed babies over the years inbreeding so when they spot the Haskins nearby, they abduct them and force Clarissa to a macabre wedding with their resident bachelor Billa. As the Haskins fight their way to escape this gruesome situation, it turns out a family of deformed inbreds is only a part of their problem when an actual Millennium Bug, a gigantic insectoid, awakens from its thousand year slumber in the same woods to breed and feast. Make a wild guess what's in the menu...

A debut feature for director Kenneth Cran and the "aptly" named company No CGI Films, The Millennium Bug can be described as a melting pot of backwoods hicksploitation horror and atomic age creature flick, done in a way harking back to classic Japanese kaiju "suitmation", meaning lots of miniature sets, hokey camera perspectives, and a menacing monster suit. This itself should say a lot about this film being cheesy and crazy as heck and you're definitely right on that department, but that's the big charm of The Millennium Bug. (no pun intended...or is there?) It captures the bygone days of midnight monster features and 70s style drive-in exploitation to a tee, and while its wildly zany direction, crazy dialogue and insane tone offer little time for our protagonists to properly develop and may as well made our human villains too loopy to be considered threatening, if not scary altogether, it does make up for the movie's moderate budget and befits the loony story, bringing out B-grade campiness that can definitely satisfy, if not fairly entertain fans of good "bad horror flicks".

All this being said, The Millennium Bug wonderfully divides and paces its attention between the backwoods human horror that are the Crawfords and the titanic monstrosity that is the title creature, before merging the two in the final act. Instead of going straight as a monster movie, the story pulls a Jaws (1975) build-up on us by hinting the bug and what it can do before giving the full reveal halfway into the run, all the while filling in the wait with classic hick terror of evil hillbillies ruining everybody's night with murder, rape and bad banjo music. Now, the movie could have given every minute to the bug and its pointy tendrils eating anything warm on its path, but I personally find this set-up rather interesting since it does give us an unusual sideline for a monster flick, even if said sideline is more or less a backwoods slasher plot with what appears to be rejects from a 80s/90s Texas Chainsaw Massacre sequel. I guess it'll depend on who's watching whether these cartoonishly evil clan are relevant in the story or not, but I just happen to be the kind of guy who can't get enough of bad slasher flicks and it's not often I get to see backwood inbreds fight off a giant bug, all the while both antagonists menace a poor hapless family.

On that note, true to the movie's "no CG" claim, most of the gore and special effects are done practically, from vicious shotgun murders to giant prehistoric larvae attack. While I find some editing done to "enhance" these effects slightly questionable (I think I heard a cartoonish "squish" sound when one of the victims got analed by a tendril. And then there's the obvious blue screen effects), I am still impressed by the work done for the Millennium Bug's rampage, as well as the monster's very design and mysterious mythos, considering  its scale and the budget. In fact, I can tell most of the movie was shot around man-made sets and it undoubtedly has that Evil Dead II vibe to it all, much to my nostalgic enjoyment and amazement with what big imagination can do to something so little.

In itself, The Millennium Bug is flawed, but I can't help but feel that these flaws are intentional. It is definitely made for the old school monster fans among the horror community, those who probably can stomach gross-out gags, tons of goo, free-flowing gore and rubbery monster action. If you're one of these people, then why not join in the fun and give The Millennium Bug a try? If you're just curious how backwoods slasher clans would react to a 50-foot possibly prehistoric carnivorous bug? You don't me to tell you twice to join us!