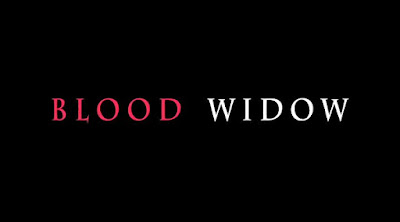 Y'know, if I had a penny every time I see a new slasher movie boasting their villain would become the next face of horror, evil or some shit like that, only to have said new face of horror, evil or some shit like that fail to fulfill that claim, I'll be... Probably a buck or two richer. Bottomline, we see this a lot in recent slasher flick releases just to sucker in some gullible fan thinking the movie'll be great but the brutal truth is most of these new slasher villains will never get to be the new face of horror if their movies altogether suck. Hard. Really hard.

Blood Widow is one of these new age slashers that thinks it has a potential cult icon in its hands: a porcelain masked female killer wearing, from afar, what look like an S&M supervillain costume. It's cute, I'll admit that. Even a bit sexy with them hips, but what in the holy hell is a villainess like her doing in a movie like "Blood Widow"?

The story is perhaps one of the most basic backwoods slasher flicks I ever laid eyes on and I'm not saying that in a fun way. Nor in a satisfied way. But more in an "oh God, is that really all there is about this movie? Just 'another group in the woods getting cut up in pieces by masked loon treatment'?" way. The only variety I am seeing here is the aforementioned nagging element that the villainess wears what appears to be a comic book supervillain outfit for some darn reason (though they did mention she was abused as a kid. Maybe this was her dad's S&M suit?) and that the reason why our victims-to-be are in the woods is to throw a house warming party, giving them an excuse to act like teenagers despite, I dunno, being in their twenties? (Yeah, there's always something about the outdoors that have young adults killing 1/3rd of their brain activity to do stupid shit like accidentally vandalizing a killer's lair and marking themselves as targets for said killer, doesn't it?)

It's simplicity meant that it's pretty straightforward to what it wanted to do and I find myself hoping Blood Widow would at least deliver some satisfying onscreen murders to remember our titular killer by. (Y'know? The very reason why she is dressed in a way that says "Franchise me! Franchise me! I'm a masked female slasher so franchise me!?")  Well, while the kills do have awesome grue and the count is moderately sizable, the fleshbags being mutilated are as dull as a 20 year-old used nail file and since anyone barely really mattered here, the genericness of the plot hits harder on the boring factor, making it's moderate feature-length running time feel like hours and I find myself caring very little whether miss porcelainface leatherskirt hacks them to death or not. (Yes, I know slashers aren't really known for deep writing and character development, but is it so much to ask for at least one or two interesting victims?)

I don't want to sound like a snob for what's simply a routine slasher movie that actually does deliver what it should be delivering, but Blood Widow felt and look like it was hardly trying. I wanted this female killer and her story to work as we don't get a lot of memorable femme fatales in the slasher genre, but if all we get is the same stroll down the cheap bloody woods and a paper thin killer whose only identifying factor is a suit, then even I can't pretend to be shallow enough to enjoy this.

Do as you like with Blood Widow. From what I can tell, some people out there are much forgiving than I am with this movie, so I think I'll leave you to see this if you want, while I enjoy the company of other slasher women bumping people dead in the woods. Now if only I could make up my mind which to see: Friday the 13th (1980) or Sleepaway Camp II: Unhappy Campers (1988)...