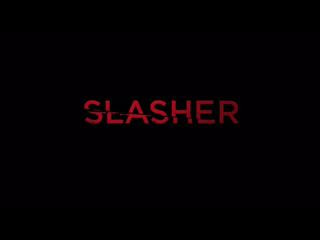 I remember when Harper's Island (2009) was the only slasher-themed TV series I got to see and now, from later to present 2010s, they're kinda everywhere. From the awful likes of Scream Queens and the okayish murder mystery that is MTV's Scream The TV series, the selections are plenty but very little get to be anywhere as exciting as, let's say, the revenge epic that isthe first season of Wolf Creek, but I will give kudos for these series for trying capture both the thrill of a good bodycount and the theatrics of an engaging TV drama. Much like this Canadian mini series simply called "Slasher". 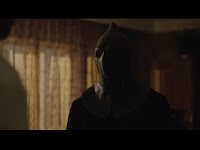 The first of eight episodes starts like your classic slasher set-up: in the late 80s, at one Halloween night, with a man and and his pregnant wife being macheted to death by someone in a medieval executioner's wear. By fate, however, the now-dead couple's expected baby survives the ordeal, gets rescued by the police and returns to live in the same house 28 years later as Sarah Bennett, a talented artist and a loving wife to journalist Dylan Bennet.

Hoping to get closure by living in the same neighborhood her folks used to live in, Sarah instead gets roped to a series of serial murders happening around town, perpetrated by someone donning the same Executioner garb worn by her parent's killer. But with the actual Executioner, a former priest named Tom Winston, captured the very night he committed the infamous Halloween double murder and is currently behind bars, it's everyone's wild guess who's behind the mask this time. It is clear, though, that this garbed loon has a bone to pick with the entire town and that includes Sarah herself. In writing, Slasher has more in common with serial killer thrillers than the titular sub-genre, with most of the action focusing on the identity of the new Executioner, a mystery that branches out to other sub-plots that'll likely tie up to the recent killings, such as an incident of domestic abuse that left a man missing, a revenge plot involving a cinder block gone wrong and even a possible kidnapping case. It kept the plot going to say the least, with the moderately large cast getting fleshed out in each episode and, interestingly, would either grow better or worse as an individual when their past sins and/or regrets are brought into light. Some cliched characterizations are inevitable (I mean, it is a slasher after all) and a few may even overstayed their welcome, but they were mostly tolerable to be fair, something I really wish I could say the same for our protagonists.

While it's bad enough to follow a movie where the leads barely have any chemistry and often have you feeling a bit intense seeing them in the same room, try having this flaw chucked in a series of eight 45 minute episodes. The result is multiple dragging moments between Sarah and Dylan, a couple who we should be feeling and rooting for, but with one of them hogging up most of the spotlight and doing the dumb pitfalls a slasher victim should be avoiding, while the other is simply just "existing" there, what should have been an engaging couple driving the story forward together was reduced to a relationship as complex as a footnote. 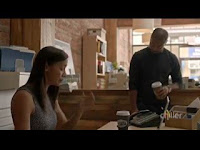 Sadly, they're not the only issues I have with Slasher; the main mystery itself, for one, wasn't entirely bad with its few twists and decent directions once in a while, but it can get very slow and a bit too tangled up for my enjoyment, which didn't help soften the mind-numbing lackluster reveal at the season finale when they had one of the many underdeveloped characters be our killer all along. Not gonna tell a lot about this person but all you need to know is that their reasons for the murders were rushed and they barely made a lasting impression without the mask and suit.

Thankfully, whatever slasher moments Slasher have, it was at least worth the small minutes of my time; The Executioner, as a silent killer, just looks awesome and I love the torture porn-twist of some the murders, not pulling back on the blood, gore and even nudity. (death by exposure, anyone?) Basing these killings on the Seven Deadly Sins isn't entirely new for any matter (my guilty pleasure Class Reunion Massacre (1978) hilariously attempted this, and then there's the serial killer thriller SE7EN), but it did lead to some engrossing backdrops on each victim as to why they deserved their deaths and more than not, these backdrops are far more interesting than the main "who's the Executioner?" game the entire town is playing. 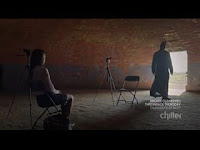 Not gonna lie, I may have expected a lot from this series seeing the numerous praises it was getting for the time and, for the first two episodes, it was justifiable. But the deeper I go, the more people gets killed and the more sub-plots brought into light, Slasher simply got too busy with itself that the main mystery felt overshadowed. Still, it has blood, guts, and a few good side stories latched along, so I guess it wasn't a total waste of my time.

As I am writing this, I just checked out two episodes from season 2 and I'm liking what I am seeing so far. (It's definitely much closer to being a slasher!) Here's hoping it'll be an improvement...