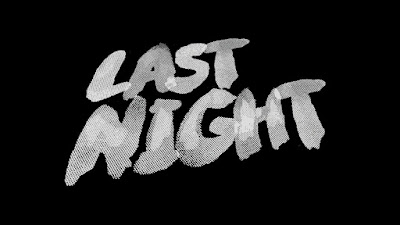 Funny story, this review comes with!

It was around June while browsing IMDB for slasher flicks that I may (or may not) watch and cover for this blog when I saw the post for Last Night (2015). The image used for the page was eye-catching enough- that of poster featuring a worn-out anime girl mask - so much so that I decided to try looking it up online for a quick lookie-look and only found a set of trailers.

After half-ass commenting where I can watch the film, the short's director Will Phillips responded via Youtube a month later that he can get the film for me. It's a response I never really saw coming and a request I didn't really think was worth their time, but true to the man's word, he emailed me a link to his film at August 2017...and I'm only finding out about it recently.

So, to Mr. Phillips and all the good folks who are (or by this time, were) expecting a review of their film 5 to 6 months prior, my apologies for the delay. Work life and life in general got in the way and I never really thought you'll take the request of a (as of writing this) 25-year old Filipino nerd who unhealthily ingests horror flicks as sustenance. Please don't sue me.

The short is pretty basic in terms of story; a trio of teens appears to be prepping up for a wild night, only for something else to happen that involves masked killers and a home invasion. It's nothing altogether new to be honest, playing it straight as any slasher short could to the point it is predictable. Still, I love a short that shows style once in a while and there were a couple of scenes that I can tell were Halloween (1978) inspired in regards to cinematography.

I also noticed a lack of dialogue, with gimmicky text speak animated on the screen making up at least half, if not most of the conversation taking place. I'm guessing this is a way for the short to build up atmosphere through body language since the movie's small running time pretty much meant the action gets rolling pretty soon. If this is the case, then it is fairly impressive, even if some of the slasher action brought out some chuckles from me. (Why are the two anime girl-masked killers so choreographed in their murder? It's not like anyone would be awake and watching them in that room while they both go creepy on their sleeping victim.)

Long story short, Last Night's a fair ride of a slasher flick. The lack of onscreen blood work did made this short feel a tad dry but, structure-wise, it's relatively okay.