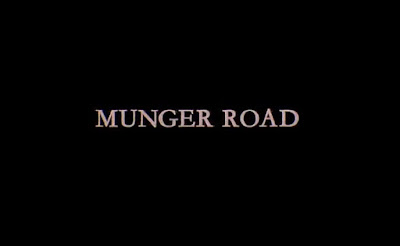 Back at my late high school years, my mum watched Fingerprints (2006), a movie about a mystery tied to an urban legend where ghost kids push cars to safety should the vehicle stall in the middle of some train tracks, leaving little creepy fingerprints behind as proof they were there. (Hence, Fingerprints) Knowing I'm a big horror junkie, she heartily recommended it to me, but me being more in touched with my weaboo side (and zombie flicks) at the time, I didn't think care about seeing a ghost movie as those are rarely scary and/or entertaining for me. (And they still rarely do) Out of respect, though, I told her I will try it and simply left the copy sit in my room to collect dusts until we sold it during one of our yearly garage sales. 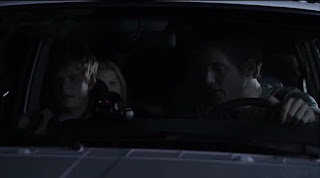 Moving forward to the years I was re-discovering slasher flicks, I found out Fingerprints was actually one-part slasher and I figuratively started kicking myself in the balls for missing out on it as, based on some reviews I've read then, it was good. Not great, but good! I eventually found a way to see Fingerprints finally (and like what those reviewers said, it was fun!) and I am sharing you this story because not only does Munger Road tackles the same urban legend, but I actually saw it at my rentals multiple times and dismissed it coz, well, I thought it was a ghost movie when it is really one piece slasher flick. If there's a hate crime involving certain horror sub-genres, then I'm guilty of it more than once apparently.

(To be fair, it's not like I would have missed anything fun, though...)

In this film, four teenagers drive up to the titular road hoping to test out their local urban legend of helpful ghost tykes, while a duo of cops checks their sleepy little town for an escaped killer priest who have done away 6 children some time ago. The further the night evening goes, the more the two plots slowly (and I mean slowly) coincides as the killer the cops are after may have found their way to the teens, now stranded and being picked off one by one. 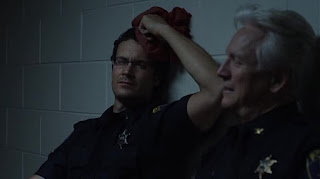 From where I stand, Munger Road can't seem to make up its mind with what it wanted to be as it tackles the supernatural, cop thriller, teen slasher and even a bit of found footage all in one roll but done in a slow burning direction that's supposed to create tension and atmosphere, but more likely have caused more tired groans and bored shrugs. It started out okay with the characters get going with their plans that night, only to be disrupted by something unexpected like being stuck in the woods or the sudden escape of a notorious child killer, but you can only go so far with sticking to these scenarios and not do anything save for bookmarking each events with something stupid or repetitive, like the slasher cliche of dumb decision making (Even though one of them teens repeatedly suggests the smart move of sticking together!) and false scares.

And yet, this is exactly what this movie did; kids get too antsy being in the woods alone so one of them gets out to look for help while the others wait, only for another one of them to get antsy and going out on their own to look for help? Wash. Rinse. Repeat. Cops bust in a possible hideout to find something or someone else that wasn't our killer, only to learn another possible place for them to start checking? Wash. Rinse. Repeat. It wasn't until the last act that the film finally got going somewhere, but even by then, Munger Road failed to deliver anything spectacular with its dry-as-desert offcamera kills and an anti-climactic open ending that I'm sure is as good to happen as that promised Scalps (1983) sequel, Scalps II: The Return of DJ (spoiler alert, it never did!), a damn shame considering how much I wanted this movie to work.

Personally, I like Munger Road's concept of steadily merging two seemingly unrelated plots into a bonafide slasher finale. The relatively small teen casts actually looked and sounded decent until the script had their characters turn into dumb and distressed victims the moment they got stuck, but I always loved the chief-deputy duo here played by Bruce Davison and Randall Batinkoff respectively, with their father-and-son type partnership that made their side of the movie more fun to watch and easier to root for. Heck, I would even say that the snail-pace wait was worth it if this film ended up with a proper massacre, but its small budget may have prevented any of that from happening and the producer's plan to do a bigger film may have cost this movie a real ending. (From what I read, the sequel was written first but due to budget restraints, producer Kyle Heller decided to do a smaller movie as their debut before working their way to the sequel. Munger Road was said smaller movie.)

While I don't dislike Munger Road for its good bits, its flaws are overwhelming and murks whatever positives this movie can offer. That said, can't really recommend it, but if want to see it? Go for it, baby. It's your time you'll be wasting next...