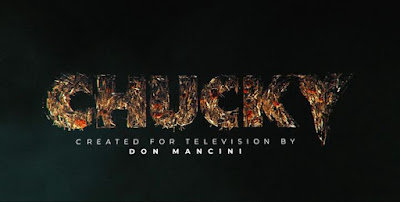 Chucky (2021 Series)
Rating: ***1/2
Starring: Zackary Arthur, Bjorgvin Arnarson and Alyvia Alyn Lind
Over the years, the Child Play movies evolve from a creepily clever take on supernatural slashing to a splatstick horror comedy parodying the ups and downs of serial killer married life and parenthood, to a straight-to-video mish-mash of the old and new which we last seen ended with open doors all the way back at 2017. Now, it appears the iconic killer doll is hitting the small screen as a TV series and the result is, well, mostly good!

Taking place some time after Cult of Chucky (2017), we start the scene at a yard sale in Hackensack, New Jersey, where young artistic loner Jake Wheeler (Zackary Arthur) purchases a vintage Good Guy named for an art project made of doll parts. This more or less makes him the weird kid in school, a baggage he's struggling to carry along the usual coming-of-age teen angst, which so happens include dealing with his bullying cousin Junior (Teo Briones) and his cousin's queen bee girlfriend Lexy (Alyvia Alyn Lind), as well as handling his own insecurities as a gay boy secretly crushing on cute true crime podcaster Devon. (Björgvin Arnarson)
Problem arises when Jake's depressed drunkard of a father hit the bottle too hard one night and goes physical on the boy, prompting the Good Guy to break away from Barbie-mode and do him real good with some handy dandy live wires and projectile vomiting. (No, I'm not kidding) The death is ruled as an accident (for now) and Jake moves in with his uncle's family, a living arrangement Junior isn't too happy about. But it seems our pint-sized slasher has some plans for Jake as he starts talking to the boy about the joys of murder and how he's really on his side, giving the loner a sense of warmth that just so happens to don a bloodied kitchen knife. We can tell this is all manipulation but why exactly is the doll so very keen on having Jake do away his own murders? 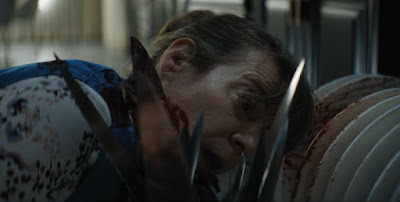 It all leads to some secrets revealed, pasts explored, unlikely partnerships made, the return of a few familiar faces and an increasing bodycount that'll leave the town of Hackensack doomed in the plastic hands of our infamous Lake Shore Strangler, Charles Lee Ray (And company), but not before Chucky plays the waiting game focusing itself with the story first, random bloodlust second. And for a good run, this works well enough as the tween actors do a remarkable job on their roles as little misfits and misunderstood troublemakers despite some predictability on their development (navigating young queer love and the typical bully-learns-humility arc, to name a few), a fact that makes up for how most of the adult characters here are written flimsily, lacking any real personality and with tongues pressed oh so firmly in the cheek that their incompetence and ham earn them deaths via rampaging killer doll.
Thankfully, it isn't a Chucky show without the man himself, Brad Dourif! And as always, along with the workably expressive puppetry and practical effects bringing the Good guy doll to life, he brings a lot to the table as our iconic late-80s killer doll, ranging from being funny and comforting, to dangerously menacing, sometimes in a single scene wherein he had to interact with whoever kid he's preying upon, Jake included. It's here where the series tackles an intriguing aspect that was never fully explored in depth in any of the movies, providing a more psychological stab at how Charles Lee Ray works as we see his not-so-humble beginnings as a psychopathic child growing up into a serial killer, developing philosophies throughout these years as life lessons and metaphors glorifying the need to do murder. It is these philosophies and a level of gentleness that put Chucky here in an unusual position as a mentor, hoping to influence his pupil's homicidal impulse for reasons only he'll benefit from given that it doesn't get challenged. 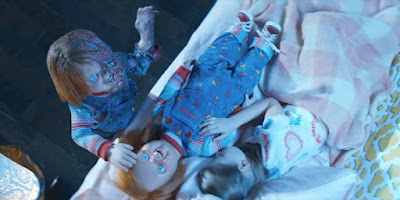 Within the first half of the season, Chucky explores the effectiveness of the Charles Lee Ray approach to being a slasher guru to the youth, culminating to some good drama and development from our young casts, as well as some decent murder sprees as Chucky eventually starts taking lives and harming others before fighting against an alliance between Jake, Lexy and Devon. When the second half of the season rolls in, though, it feels like the series shifted to another story as while most of the major tensions were resolved by this point, there is still the mystery behind Chucky's arrival in Hackensack and what his ultimate goal is. This is when the legacy Child’s Play actors enter the picture, with an adult Andy Barclay (Alex Vincent) and his foster sister Kyle (Christine Elise), former Chucky victims, arriving to hunt down all the possessed Good Guy dolls, while Chucky's equally psychotic partner Tiffany (Jennifer Tilly) tags along a possessed Nica Pierce (Fiona Dourif), Chucky's terrorized victim from Curse of Chucky (2013) and Cult of Chucky (2017), to Hackensack so the two can initiate a cross country murder plan involving a voodoo spell and an army of Chucky dolls.
As much as I want to fully enjoy these returning faces, their parts in the series were a bit uneven for me; for one, Andy Barclay and Kyle spend most of their time traveling to Hackensack, leaving very little of an impression as there's hardly anything for them to do once they finally got to town. Tiffany's very complex relationship with Chucky rears its ugly head again as we see her act out both her loving partner and tired girlfriend/wife routines once more, supposedly looked deeper here through a series of flashbacks but it personally felt dragging as it added very little to what we already established between her and Chucky from the movies. The only interesting bit thrown here is how Chucky's possession works on a human victim as seen through Nica Pierce, which is later taken advantage by Tiffany in a macabre kidnapping situation. The matter that Nica just couldn't catch a break makes me wonder what the series would've been like if it focused more on her plight, which would've left her fate by the end of this season all the more shocking. 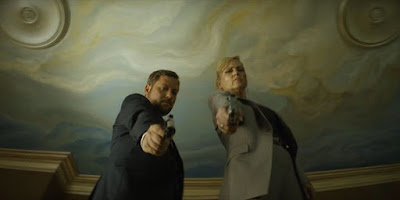