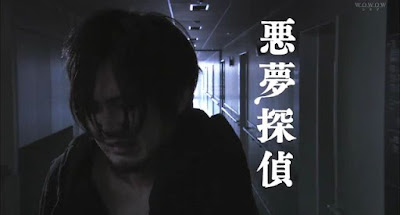 A series of gruesome suicides connected to a mysterious phone number had detective Keiko Kirishima considering the possibility of the supernatural when the brutality of the deaths are far beyond what can be considered normal, no less the fact that each victims did it to themselves while they were asleep. This leads her to look for and find Kagenuma, AKA our Nightmare Detective, a young man who has the ability to hear thoughts and enter dreams.

Though reluctant to aid Kirishima at first, Kagenuma eventually agrees and, upon entering the dream world, discovers that the owner of the phone number is a fellow simply referred to as "Zero" and he has a unique ability to both convince his targets to kill themselves subconsciously and go after them himself in their dreams to end their lives for real. Can our Nightmare Detective figure out why Zero is so obsessed with misery and sorrow? Can Kirishima resist the urge to end herself as she draws nearer Zero's influence? Can anybody (and I mean, Anybody?!) slip a happy pill in our protagonist's drink so he can be less depressed and whiny so I can root for him a tad better? ...Anybody?

For a decent half of its run, the film pretty much caters to horror buffs and gore hounds with a surreal set of murders that almost resembles those from the Nightmare on Elm Street franchise, particularly the first three movies where some of the deaths were made to look like suicides. Instead of showcasing the killer, however, Nightmare Detective went for the creepy and unsettling route of keeping "Zero" hidden around these parts, depicting him through shaky POV shots and loud shambling noises, if not glimpses of the form he takes in each attack. A lot of these scenes work for the direction and imagery used, such as tackling claustrophobic fear during the entire first kill as it takes place from an empty street before chaotically moving its way to a small and freakishly shadowy apartment where there's little to go and hide.

The following attacks soon made their way to bigger locations, but the cinematography done to these scenes (unusually voided of other people and shot with either a grayish tint or scratchy filtering) befits the nightmare logic this movie is attempting and its increasing level of violence and gore is just the right adding element to reach out for those hungry for some latex guts and splashy blood work. If there will be anything of a flaw around these parts, though, I could say it'll be the occasional pacing done between each death in an attempt to follow up on the investigation that, in all its truthful, doesn't really do much. We can already tell this is beyond normal and any little characterization made for Kirishima and Kagenuma didn't stray much from the usual soapy topic of bad pasts and personal outlooks on life, either. Most of the depressing talk from Kagenuma himself, which made him a hard character to root for with this pessimism being a distraction, but I can at least say that he does make a few valid reasons why he is this way, making him rather an interesting character to observe and that's it.

Once the movie gets to its hour mark, the horror elements are still present (with Kirishima getting stalked and chased by Zero in his most eldritch form) but a good deal of the remaining plot focuses on a more expressive and literal look into the mindset of our killer, a trippy run of non-linear flashbacks, random thoughts and philosophical remarks that all somehow found a way to find significance to the events transpiring. It's a rather nontraditional take on the classic final fight between heroes and monsters but visually intriguing for its worth, if not a bit overly stylized and a sappy with its bittersweet notes of existential meaning and of one's purpose.

Nightmare Detective, in its whole, is an okay film. It's a lot easier to digest story-wise than some of Shibuya's filmography and it even has some genuine scares and splatter to boot, a clear product of his experimental filmmaking and a conventional genre story. If you like to see something in between a traditional  horror story and art show level psychology, then this movie is a good place to start.