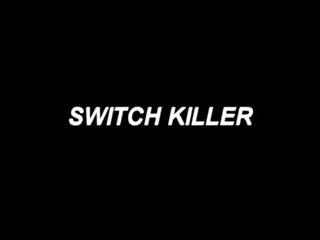 Sometimes the trashiness of a bad movie can be said movie's own life saver, especially if there isn't anything else going in the plot department.

Tired and frightened of her boyfriend's iron fist treatment, closet lesbian and stripper Jamie escapes her abusive partner, Bobby, and drives to Las Vegas in hopes of starting anew. Time passes and it seems little changed in Jamie's favor as her new girlfriend, Brooke, mistreats and cheats on her, and a mysterious woman appears to be dropping by strip clubs, knifing anyone that comes across her path. What does this serial killing femme fatale had anything to do with Jamie, you ask? Well, with a title like "Switch" Killer (Or it's more obvious alternate, "Trans-American" Killer), you do the math.

Sleazy and crazy from beginning to end, Switch Killer harks back to old-school slashers like Driller Killer(1979), Maniac (1980), and Las Vegas Bloodbath (1989), in which we explore the gritty and dirty urban jungle known as the city underbelly while it is under attack by yet another elusive serial killer. Switch Killer is basically no different with its overly abundant amount of gratuitous nudity, and stripper shenanigans, though it did try to do a little bit of downtown drama following the struggles of our obvious final girl, Jamie. Sometimes it works, thanks to actress Cara Jo Basso's fair portrayal of the down-in-luck-and-love lead, but the tone can get uneven with the movie's hamminess and the inevitably more noticeable sleaziness courtesy of the many random T&A nakedness, so the drama is basically hit-or-miss.

Still, this does little to damage the trashy slasher fun Switch Killer offers since the movie's technically putting all of its focus on that; despite the 65 minute running time, the remaining 20 plus minutes is really nothing more than a hodge-pode of an overly long ending credit, a cool music video and a hilarious fake informercial about mankind's most favorite gas powered killing machine: the chainsaw. The 40 minute mid-feature, in turn, comes with a relatively quick-steady pacing and a lot of workable slasher scenes, simple murders that hits a perfect balance of being bloody and slightly creative, with an oddly insane (and possibly offensive) villain committing them all in the name of love. (Or something crazy like that) Perhaps the strongest of these murders (and possibly the best part of the movie) is when Bobby finally confronts Jamie, showed how much he "changed" for her and gave chase around the neighbourhood until they crash a backyard New Years party. What follows include Bobby going batshit stabby at everyone at the party, Jamie arming herself with a chainsaw to battle her ex, and one of the greater final girl-vs-killer fight to come out of a low budget slasher.

Switch Killer is a definite movie equivalent to a bag of cheese-flavored chips; it has a big look to its quality despite offering little in reality. It's hardly all that smart and engaging, but one would probably knew what they were getting themselves into and more or less just dove in to start consuming the cheesy junk just for the sake of entertainment. It's whether one will prefer sticking with said junk or not that is the real query here and while they figure that out, I certainly found a new guilty pleasure in this movie. What say you?