The Million Dollar Murder: The Case of The Scorpion's Tale (1971) 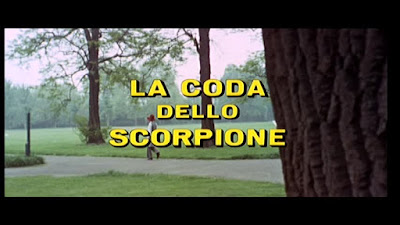 After her husband dies from a mid-air plane explosion, Lisa Baumer discovers that she is her late spouse's beneficiary to a million dollar life insurance, an inheritance that seemingly puts her in the middle of everybody's attention and greedy side.

First, the lover she is secretly seeing in London blackmails her into handing a share of the sum or else he will reveal her adulterous affair with him, making the policy invalid. Just as Lisa was about to give in, she later finds him at his apartment dying from a stab wound. Rightfully concerned by this, she then books a flight to Athens where she hopes to safely cash the insurance in full, only to be stalked and threatened by her husband's own mistress, Laura, who believes Mrs. Baumer had something to do with the accident.

Thankfully, Lisa finds a trusting accomplice of sorts during her stay in Athens, an insurance case inspector, Peter Lynch, who she is starting to get sweet on. Meeting him, however, did little to ensure her safety as, after arranging a flight to Tokyo, Lisa gets brutally murdered by a psychotic killer, who then proceeds to make off with the entire million. The murder quickly gets the attention of Lynch, as well as of tabloid reporter Cleo Dupont and police investigator Mr. Benton, and it's now up to them to uncover the truth before the killer strikes again.

An engaging thriller with a fair amount of twists, turns and bloody good violence, The Case of The Scorpion's Tail has one of the more classic giallo set-ups. One that involves a crime full of possible suspects and red herrings, some of who are destined to be bumped off rather brutally. The array of intriguing characters, in turn, are quite bountiful in numbers, enough to make likeable impressions and throw off our leads and fellow viewers whenever they believe certain leads were made. This, however, made the first third of the film a tad slow as it lays out the key players, though I find this a necessary pacing issue as it effectively sets the tone of the movie, allowing us to understand the predicament and dangers our throwaway lead was getting herself into. Eventually, the film's linear direction got everything going with the investigations once our lead got murdered and the cash stolen, and by then we are treated to a workable amount of sleek eye-candy camera work and stylish set-pieces, many of which being the murders.

With a stronger focus on plot, Scorpion does not boasts a high onscreen kill count, but it does make up the executions done for whatever the attacks and murders cooked up for the story, ranging from using laughably obvious fake exploding model airplanes for a tragic disaster, to the rather thrilling cat-and-mouse stalkings courtesy of our killer. (dressed in a full black body suit. Interesting choice) The best among these was the double murder of two suspects, taking place at their own mansion; one got snuffed out after the killer stabs their way through the door with nothing but a knife (!), while the other puts up a daring fight against his assailant, leading to a rooftop scene with a dose of the macabre as worn-out doll parts littered the place. And though these murders rarely went to gorier territories, whatever chance they get to be bloody, they can get bloody! (Keep an "eye" on one scene involving a broken beer bottle)

Scorpion neatly ends itself with a decently surprising climax, packed with a claustrophobic twist and a cliched villain monologue that mostly made sense. (The key term is mostly) A stronger highlight around this part would be the stalking sequence between a lead and a surprise antagonist, perfectly capturing a chilling isolated feel as they stalk and hide from one another atop a lone cavernous rocky island, an overall great way to end an equally great giallo.

With enough unexpected turns and curious characters to either suspect or root for, I can proudly say that true giallo fans deserve a hearty round of The Case of The Scorpion's Tale. Put on your scorpion cuffs and give this one a run!

Bodycount:
A number of people killed in an exploding plane
1 male dies in an exploding plane
1 male found dying from a stab wound
1 female had her throat cut, disemboweled with a knife
1 female had her throat cut with a knife
1 male falls to his death
1 male gets a broken bottle to the eye, knifed to death
1 male shot dead
Total: 7+
Posted by Kaijinu at 5:10 PM