Life According to A Madman: The Turnpike Killer (2009) 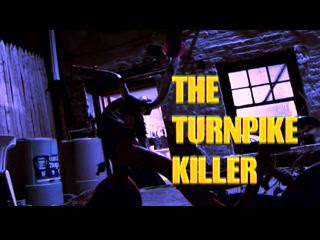 When I got my first copy of Maniac (1980), it also happens to be my first viewing of the splatter classic and I recall being disturbed and overwhelmed by its sheer brutality and distressing tone by the end of the film. I believe I was a few years younger than eighteen then and it took me multiple viewings to finally get used to the film's extremely gory and psychological nature, ultimately appreciating the exploitative horror as one of the finest the genre has to offer.

A great factor to my favorable look into Maniac (apart from its splatastic blood works courtesy of effects maestro Tom Savini) was the amazing performance of Joe Spinell (God rest him) as our titular loon: whenever he is on screen, his character ranges from being a heavy-breathing killer to someone who is truly knows he is sick and struggling to end it all, showing both presence and lack of remorse, trauma and rage whenever he commits his murders. It's an interesting watch, one that allows you to feel horrified for the atrocities he is committing, while at the same time feel sorry for him because he is alone in his battles against his own demons and slowly losing to them.

The reason why I am bringing this up is because, once in a while, we get slasher/thriller movies that share, if not try to do the same approach for their villains, putting us on their shoes for a good chunk of the narrative as a mean to frighten or exploit for our entertainment. This is often a gamble as the only time this is likely to work is when the villain gets portrayed wonderfully and/or written interestingly, something we all know doesn't happen that easily nor often. Should the villain in question come out as either too boring or too unlikable, there is a good chance the film isn't going to do well for a lot audience and only a selected few will probably learn to like it. The Turnpike Killer is one example of these killer-focused slasher movies and I find myself slightly seeing it as complete "meh" thanks to the intimidating yet one-note portrayal of it's main maniac.

The Turnpike Killer follows John Beest, a hulk of a man who is haunted and lectured by a governing voice in his head to look for his "Chosen One", all the while slaughter those who he deems weak and impure. This more or less meant killing a lot of women (and some men), ranging from random good Samaritans to the classic teacher of the night, a trail of mayhem and bloodshed that left local police and one homicide detective Lloyd baffled as they try to hunt down the perpetrator and put a stop to him.

For the first third of the movie, Turnpike Killer is simply terrifying in a good horror film way; apart from a disturbing opening scene in which John angrily berates what remains of three women he is keeping in his secret lair before murdering them, it also features a disturbing stalking/home invasion scene in which John holds a young couple hostage inside their own apartment, psychologically tormenting and belittling them before murdering one in front of the other. It's upsetting, brutal and just scary for the level of realism and intensity put into that one scene alone. Sadly, once this is over and our supposed law enforcers are put into play, the film drags into this repetitive cycle of talking, stalking and killing with little to no presence of the same intense grittiness presented to us earlier.

I will admit that the simple story is workable and the gore effects used for this movie are just great (clearly where a good bunch of the budget went to), but if the story simply takes up a pattern with little to nothing new being offered other than a chase and a kill, and the characters involved (especially the villain which the world view of the movie mostly focuses on) barely have any other personality apart from be "the angry bad guy" or "the naive girl next door", Turnpike Killer gets awfully tedious to watch the more we go into the plot, no matter how much bodies are piling up or how twisted the tone can get. It's kinda sad on my end, really, because I can tell writer-and-director team Evan Makrogiannis and Brian Weaver had their hearts and minds on the right places when they did this movie, and they might as well have done what they were supposed to be doing for those who like this film, but I really can't get past the sudden lack of deepness of its later acts, especially seeing that the movie is trying to do something bigger for its plot.

Turnpike Killer also has the usual shot-on-video shortcomings like tacky audio and grainy video quality, but seeing it is trying to capture the exploitative late 80s slasher feel, I guess I can learn to look at these as its own nostalgic gimmick, though how well it will work on other audiences might be subjective. Overall, I think this movie is more for a selective taste; I can guarantee some people will love it, probably more than I do, and I say to them, good for you. Me? I think I hear my copy of Maniac calling me again and I'll be more than glad to answer it.