So I was supposed to see someone Get Out, but ended up in an Island

I actually marked my calendar for these films, but due to a little money issue for a time (which I will no longer talk about coz the people behind my check fixed it. Thank. God), I new I could only see one.

For the first two and a half months of 2017, I kinda noticed that a lot of horror releases were...meh. In fact, there isn't a lot of horror films I'm too excited to see this year except The Wolves at the Door and Terrifier, and those that I had seen, mainly Rings, Bye Bye Man, Don't Hang Up, Pitchfork, Don't Kill It and Galaxy of Horrors, I only got to enjoy Don't Kill It and Galaxy of Horrors. The rest were...ugh.

For March, we had Kong: Skull Island playing at the second week of the month but, unfortunately, I didn't have enough cash to spend then to see the big ape go rampage for my entertainment, so when I found out that Get Out, that one movie with a really intriguing premise and great reviews to follow, is gonna screen at March 15th, I knew I had to see it! I may have missed one premiere, I'm not gonna miss another!

So, as I write this, it's hours after I got back from the cinema and....I didn't get to see Get Out. Turns out, it might have been a limited screening for my country, or that I didn't look hard enough, but these two malls I went to today all have Beauty and the [DATA EXPUNGED] Beast playing! ALMOST ALL! I say "almost coz, of course, they also had to have  Logan and some other movies I didn't really care about...except Kong! Holy Frick, the second mall had the last screening for Kong! More or less, I ended up watching the movie I missed and didn't get to see the movie I wanted for the day. It's still a win scenario for me coz, the movie was just awesome in a monster brawl-out kind of way! 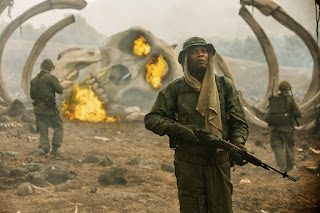 Kong: Skull Island is the second movie in Legendary's Monsterverse series, the first being 2014's Godzilla, a welcome return of the king. In Kong, most of the mythos for the big ape have been rewritten to give more focus on him being a part of an ecosystem full of super species and by that, I meant we get to see some really neat beasts! From hostile ones like a swarm of saw-beaked pteranodons and giant Daddy Long Legs, to calmer critters like giant water buffaloes and, of course, Kong. This is where Skull Island becomes an improvement over the last entry in which Godzilla was "teased" for far too long that a lot of fans seem to point how how there's barely any Godzilla in a Godzilla movie. (Meanwhile, a Filipino man writing this could say the same for the non-90s Gamera movies. Lord knows how on earth did those got popular but I guess people's tastes differ) After 20 to 30 minutes into the movie, after all of the key characters are introduced, the mighty ape wasn't shy to make a full appearance and simply show how he's King and God in his island.

After this rampage, copters torn down and people slaughtered as Kong protects his turf, we get this patterned back-and-forth focus between two groups; one lead by Samuel L Jackson as an Air Service captain who wants to get even with Kong for killing his men, the other lead by Tom Hiddleston as a tracker who ventures through the island hoping to meet with the others which, along the way, discovers with his group that Kong is worth protecting. I will admit that as bland as these characters are, they're a bit of an improvement with the human casts from Godzilla 2014; the Kong humans are not deep and I was underwhelmed by some performances and screentime (I want more John Goodman, please!), but they are slightly more colorful compared to one or two faces from Godzilla. (John C Reily was just cool here as a WWII American survivor who befriended the island's natives) There's also the fact that since this movie focuses more on a controlled number of characters instead of, I dunno, an entire city, I do get to feel for some of these characters a lot easier, though isn't to say that I still expected a lot of them to be monster chow by the end of the movie. (A lot of them were that disposable.) 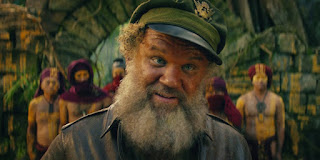 Still, I think Kong: Skull Island did a great treatment for whatever story was present and stick with what really matters in monster movies, which is, well, giant monsters, giant monsters and giant monster fights. The last fight was just as epic as Godzilla's battle with the two MUTOs in his movie, and though I'm not that "wowed" by the kind of creature they came up for Kong to do a final fight with (it's a lizard with two legs...a tough lizard, but a lizard with two legs nonetheless), at least it was a worthwhile brawl and just brought out a level of badassery that only a titanic ape can do. 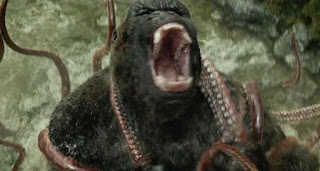 If you are planning to see this movie and are just as big of a fan of giant monster movies as I am, I say wait til the end of the ending credit. You are in for a big exciting surprise! As for the rest of you guys, I definitely had fun with this one and in case you are interested, I ain't gonna stop you! It's really nothing else but people walking through an island surviving giant things that'll eat them, but if this is right up your alley then go ahead! It's worth the watch!

(Until then, I guess I have to wait until Get Out comes out in DVD...again)
Posted by Kaijinu at 10:29 PM