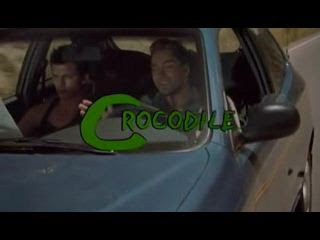 Like some (if not most) horror fans back at their childhood, I was (and still am) into monsters. Though my taste can be somewhat picky (black and white monster movies doesn't do much for me, as well as most Drive-In creature flicks), if we are to talk about giant mutated animals like Ticks (1993) or Mosquito (1995), something incomprehensible like the worm creatures from Deep Rising (1998) or nature's genetic Chimera from The Relic (1997), or even towering titans destroying cardboard cities with the likes of Godzilla and company, you can bet your two cents that I'll be that one kid who goes unhealthily giggity whenever a monster or monsters appear on screen, even if they may be as mediocre as the giant reptile from this "okay-ish" Tobe "Texas Chainsaw Massacre" Hooper millennial killer animal flick, simply titled Crocodile!

Taking place in Springbreak, the film follows a rowdy group of teens visiting a marshy lake to cruise along and party on a small houseboat. And as any lake-based horror flicks in existence, there also happens to be a local tale about a billionaire who became obsessed with his humongous pet crocodile named "Flat Dog", to the point he made shrines for the beast and worshiped it as a god. Legend has it that the croc is still around, with an appetite to match his size, prowling the same lake the teens are at for a good meal.

Now, not only this turns out to be true, but apparently ole' Flat Dog also has a mean and vengeful streak to just about anyone who disturbs her nest, lovingly and bloodily shown to us as she munches on two hick fishermen after they ruined most of her eggs. This eventually became the case again when the teens spot what remains of Flat Dog's nest one morning and decided to play a prank on a friend by stuffing her bag with the croc's remaining egg. Flat Dog obviously didn't think this is funny and she now sets her teeth on having these dumb kids for dinner.

Much like Jaws (1975) or Grizzly (1976), Crocodile is basically a slasher film with the titular killer animal taking the place of a masked knife-wielding psycho, as the main run simply has Flat Dog attacking and eating the teens one by one after she destroys their boat and stranding them in the woods, a similar backdrop to just about a majority of backwoods bodycounters to feature evil on two legs. As gimmicky as this sounds, however, there really isn't a lot else going on for this treatment apart from an ineffective teen drama at the beginning which, at the end of it, did little for the story as a whole. And with the characters being disposable (one or two of them literally there just to be eating), the writing relatively thin with a lackluster finale to follow, and a couple of scenes that clearly shows how low the budget was for this movie, these are more or less further shortcomings Crocodile is guilty of, doubling as mostly good reasons why this film didn't do too well for some (if not most) genre fans.

However, as flawed as it may be, Crocodile was at least an entertaining one at that. There is a fair amount of cheese tossed around within its pseudo-serious tone, evident on how the film treats its main monster, scripting and the numerous amount of scares, both sort-of genuine and the not-so-genuine. As of a lot of B-grade monsters, Flat Dog's backstory as a rampaging former pet and religious idol does hark up a few snickers, and the accuracy of her depiction as a real croc is pretty stretched out considering she can actually give chase and catch up to her victims, last quite a long time outside any body of water and, of course, could friggin' remember and stalk the douches (and company) who took her egg! It's the kind of crazy take on an animal that makes every moment it is on screen (or partially on screen) worthwhile and this movie generously tossed in a range of good animatronics and practical gore effects to satisfy a fan's little craving for bloody mayhem. (And staying true to the slasher flick premise, the kill count is relatively high, too!)

Tobe Hooper's direction also allowed a more acceptable pacing and transition around the first half of the movie, with a lot of the stalking and animal attacks coming out pretty workable for a b-grade horror flick. The only thing about this is that I wished it was retained around the last act as, while we are still treated to some decent killer croc action by then, it wasn't as exciting and perhaps even a lot cheesier compared to the grim and bloody feasting we had at the first half. Could have been worse, true, but it still could have been better as well.

At the end of it, Crocodile is simply here to exist as an entertainment piece for anyone who isn't expecting anything above a giant animal snacking on generic slasher film victims. I liked it as a kid, and I still kinda do right now, so while I will admit there are better killer croc films in the game like 2007's Rogue or the original 1999 Lake Placid, if you wanna see Crocodile though, be my guest!