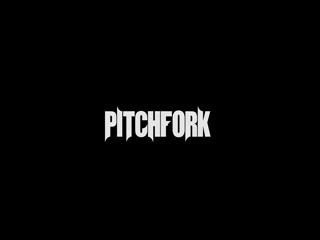 The last two slasher movies I saw that advertised their killers as "the next face of horror" were The Gallows and Charlie's Farm. These two movies, while not entirely great, were at least good enough of a watch thanks to Gallows' near-perfect blending of paranormal found footage and slasher tropes, and Charlie's Farm's acceptable practical grue and a workable monster of a villain. Thinking I might hit the same luck with Pitchfork, I gave this movie a chance despite noticing some questionable quality from the trailer itself, as well as seeing the increasing number of mixed reviews in the web. What can I say? Experience is the best teacher, right?

Pitchfork follows Hunter, a young man who just came out in the open gay, visiting his home town and meeting his family for the time since he left for the city. And since his father isn't too keen on having a gay son (or so I think. Kinda hard to assume since he and our protagonist hardly interacted), Hunter also tagged along his gang of rowdy friends as his emotional support and, as low budget slasher laws demand it, one of their means of supporting their queer pal is to hold out a party inside a nearby barn, turning it into a Southern rave and inviting ho-down hungry townies for dances, booze and the occasional premarital sex. As night falls deeper, it wasn't too long before we are introduced to Pitchfork, a lean feral man in brown shorts and fur mask, with a pitchfork for a left hand and a clear intention to kill anyone that just so happens to be in the way, which spells nothing but bloody bad news for Hunter, his family and everybody else.

There's not a lot to say about Pitchfork other than it is yet another low budget slasher done mediocre, with a plot actually missing out the opportunity to make use of what could be an interesting gay coming-of-age element and instead stuck with the typical paint-by-number bodycounter. Any potential drama concerning the lead's gender preference are discarded once the partying and murdering starts, favoring the familiar route of teens being teens and masked slashers being masked slashers which I guess could have been forgivable if said route was any better.

You could say the film suffers from disposable characters who, for some reason, resembles late 80s/early 90s horror movie victim with near-stereotypical wardrobe choices, making it easy to spot the jock, the nerd, the token blacks and the possible final girl among many other tropes. I guess this was an attempt to make the story feel timeless, throwing back to the era wherein slasher victims simply exist as meat for the carnage, but with the kind of acting quality seen here, I can't help but find myself distracted by the wooden or (occasional) over acting and the overly simplified characterization of our thespians.  At times I chuckle out of the sheer silliness of what these characters do (like one scene wherein both Hunter and Pitchfork do charging poses against one another, a cool moment if done at the right time), but there were more moments that left me staring blankly at the movie, feeling nothing for just about anyone on-screen.

Now, if the problems were only bad acting and an unfairly easy story, I would have still given Pitchfork a better rating as a slasher since it is pretty cheesy fun so far. Sadly, the film just had to have most of the guys killed off by the hour and leave me annoyingly disappointed by going down the dreaded "torture porn" route, courtesy of Pitchfork and/or a pair of sadistic nutcases thrown in just for the last act for reasons I can only imagine as a tribute to the original 1974 Texas Chainsaw Massacre, only less gritty and more desperate. So much so that the supposed intense torture scenes still have that cheesy tint to them, breaking any sense of dread this unnecessary and tired curveball was supposed to have.

Add an even cheesier mid-ending credit scene that's probably meant to be a pitch for possible franchising, and Pitchfork more or less lost control of its own story by the end of it all. It's sad, really, as I really wanted to like the decent-looking killer this movie is advertising for us, but there's really nothing all that great with the story done for him. Despite the attempts to do something more than just teens being slaughtered, the overall product just felt too uneven and overworked, probably one of the few times a slasher could have benefited from being simple.

Next face of horror? Well, Pitchfork, not quite. You have a long way to go...