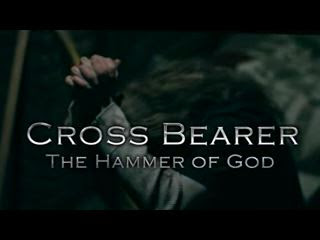 70s style exploitation in a modern slasher? We've been there already but Cross Bearer tried.

A man who calls himself the Cross Bearer made it his life's mission to cleanse the world of sinners, one hammer blow at a time, prowling the underbellies of the city he dwells in.

About to get tangled in this erratic crusade is one Heather, a stripper hoping to find that one chance to get away from her hell-hole life, to leave behind her coked-up girlfriend, her soul-sucking job, and her abusive boss. She is currently tasked to make a drug-run with a local pimp who, unknown to him or her, just fell victim to the Cross Bearer; with her girlfriend, her secret lesbian lover, an additional stripper and her boyfriend tagging along, Heather and her unsuspecting entourage soon discovers the horror that awaits for them at the hands of the religious nut.

Originally a more comedic creation, writer, director and producer Adam Ahlbrandt captured so much of the raw grit of grindhouse films whilst production, showcasing the sleazy and dirty underworld in its pimp, druggie and hooker-infested glory, that Cross Bearer ended up feeling just as dirty as the world it exists within, which can be a good thing for some, but nauseating for rest.

While it does have a few chuckle-worthy scripting and acting, and for the most part, the slasher conventions delivered enough intense stalking action and uber-gory (and for a few, inventive) killings to cater to the bodycounting crowd, when it needs to be dark, Cross Bearer can be dark; a good example will be the first and last act of the film which focuses on the plight-for-flight struggle of our lead heroine, Heather. Interesting since, much like the rest of the cast, she has a dark side that's just waiting to get out, but unlike most of the characters portrayed here (who were mostly sleazy cutouts of urban garbage with one or no dimensions to speak of) we want her to escape her current life since the film's hodge-podge pacing and imagery gave her enough screen to flesh this woman out.

The killer himself can also be seen as an antithesis to Heather's existence, or at least after going through his kill spree wherein at the end, while our heroine faces a new world with a gloomy view, the Cross Bearer faces his with hope. This being said, the villain here is not in anyway new or inventive (the murder weapon reminds me of the one used by the titular killer in The Sleeper (2009) and his mask is a generic Friday the 13th Part II (1981) sack), but the way he fits into the movie's tone and message made him quite memorable in a unique way.

Production-wise, the editing on a few scenes (more particularly the first act) did made the continuity a little confusing. It wasn't until things were explained via exposition that it made a whole lot of sense, making the rest of the film quite easy to follow through. Apart from that, I came to like the colored-lighting, crisp camera quality and brooding retro-soundtrack that, much like the direction, fits the film's atmosphere perfectly. And then, of course, there are the splattery-good murders ala practical effects, impressive considering the movie's claimed low-budget.

It's movies like this that drove me into becoming a religious skeptic, meaning I believe in God (or gods) and I see religion as man-made; the creepiness that someone like the titular Cross Bearer can exist (or already is existing) gave this film that extra punch and I totally enjoy it. Cross Bearer is depressing, raw, overall bloody, all of these being its aim and hit right on the mark. Can I recommend it? Only if you have the stomach for it.