The Curse of the Evil Jet Pilot: Blood Relic(2005) 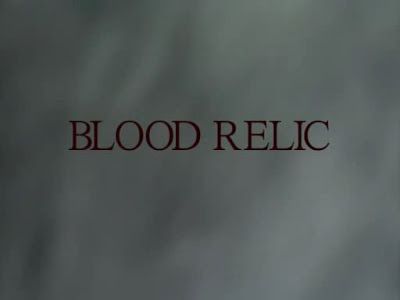 At 1983, a fighter pilot named Hank Campbell goes crazy and murders some of his colleagues, seemingly under the influence of a cursed talisman. (We know this cuz we saw him holding it, experience weird obscure flashbacks after doing so, and violently coughed blood at a mirror. Y'know, the usual supernatural possession gig)

He was caught no soon after, unknown to them that he hid the talisman in a secret compartment and plans to get it back upon his release. Which will be 22 years later, in the present. By then, the hangar's transformed into an air & space museum, wherein a group of teenagers with sex and booze in mind work at and plan on hanging out at after their shifts are over one day. Of course, this calls for the arrival of a killer fighter pilot in full gear and helmet, but could this be Campbell underneath the helm? Or somebody else full of rage?

As cheap as disposable razor, and it definitely shows on more than one occasion, Blood Relic can be challenging to watch due to the fact that it is terribly cliched and creatively underwhelming. It's one of the few titles I was hoping to see solely because of what the killer was wearing and its plot-point that it all takes place inside a museum, a location that already proved itself as a wonderland of potential havoc with films like Wishmaster (1992) and The Lamp (1987, AKA The Outing). Sadly, due to the budget, the entire film instead takes place in the old hangar inside of an air & space museum, which means not only are we left with boring long hallways and cheap-looking break rooms for the slaughter to take place on, but the killings are hardly memorable or unique as the props and displays were never that implemented into the story.

Instead, we get the basic slasher plot of dumb and sexed up teens drinking beer, being jerks, getting it on with rape fantasies (no, really), doing random seances, before meeting their demise at the hands of a killer fighter pilot with the ability to not only strip a victim naked, but noose her and rig said noose to a door as an elaborate trap in a matter of a single minute or two. (I'm more concerned at the fact he had to strip the victim naked. Was there really a need for that?)

To be frank, easy and logicless killings are a few things I can actually accept coming from a cheap slasher, but to make the last third so dull and slow with all the useless expositions that we pretty much figured out halfway into the film? That's bound to bore and/or upset some folks, more even when the film decided to throw off a rather ridiculous twist ending that has its smart moments, but overall a "meh"-worthy way to end a B-grade shlock. (And even at that, Blood Relic was dang slow. Jesus, just die already, killer! Stop talking!)

Not gonna lie, Blood Relic had the potential of being a good film if the producers had the budget to work with. It seems like they already pictured a unique slasher with the inclusion of a cursed talisman, an idea that I really like, and some of the scenes and brutal snuffings at the middle run have their good moments, but I guess the lack of funds had them doing things the "standard" way and gave us this insufferably bland bodycounter instead. Shame, really; if you want to give it a shot, I won't stop you, but if you want a real museum carnage, I recommend The Lamp if you're into low-budget B-flicks, or Wishmaster if you like moderate-budget B-flicks!