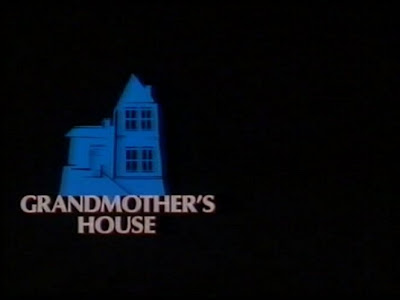 With their mother gone missing years ago and their father recently passing away, David and his older sister Lynn are now parentless. Fortunately, they still have two loving grandparents who are more than happy to take them in and live a comfortable life next to a beautiful orange orchard.

But things aren't as sweet as it seems when later that night, David caught a glimpse of his grandparents attacking and apparently killing a wandering woman near their new home. Unsure if what he saw was real or not, the boy decide to ignore this as much as he can, which is easier said than done when more bizarre things start happening at the orchard. As each day passes, David grows more uneasy with his grandparents and begins to question his own sanity, as well as survive a sudden deadly turn for his new life when a knife-wielding psychopath shows up.

Quality-wise, Grandmother's House is a neat thriller with a commendable atmosphere and visuals, many of which plays well in building up the intrigue concerning the character's situation as the on-goings around the titular house start to get sketchy; the grandparents are obviously hiding something but when a certain parent suddenly appears alive and (un)well, seemingly stalking our lead boy, the film toys around with expectations and delivers more than one twists to catch us off guard.

The problem, however, is that not all of these twists work; the first sets the movie shifting into a different tone as a rather workable slasher. In here, a maniac begins to work their way through a beautiful orchard and various bystanders with their trusted knife, intent on catching the children. The chase scenes here are among the bests I've seen in a bodycounter, enough to actually make me forgive the low kills count as the stalk-and-slash set-pieces were viable enough to be intense, scary, and even a little adrenaline-fueled once the killer grabs hold of a convenient truck. (Think the opening of Jeepers Creepers only in an orchard and two kids trying to outrun the vehicle on foot)

Sadly, once the chase is over and the film prepares to wrap things up for a finale, the story messily hobbles to the end; a few of the characters go weird (like dangerously weird) and we are suddenly slapped on the face with this last minute shocker that both confirmed and revoked our assumptions. I frankly don't know what to make of it, but seeing how odd some of the acting and scripting were prior to this, I guess it's in par with the movie and that makes it "okay" on a B-flick standard.

Grandmother's House is good when it wants to be and it shows on the majority of the play; I love the little mystery and little slasher scenes but I think they could have acted some of these bits better and tie all the events up in a more impressive finale. Nothing that big to be considered a fan classic but a decently fair run as a rentable title. I say give this house a try!