The Night of The Punch Bowl-Head: Silent Night Deadly Night III: You Better Watch Out (1989) 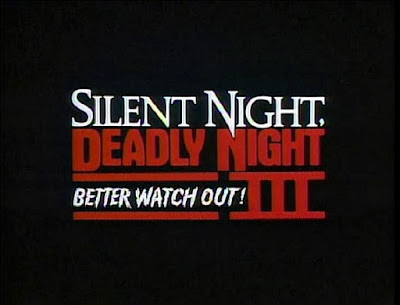 For many, these two movies would been enough for the franchise but prior to having Silent Night, Deadly Night remade into the modern cult flick Silent Night (2012), there were three more films following the original duo, with the third being the final installment of the Santa Slasher plot before jumping into witches on the fourth and killer toys on the fifth. 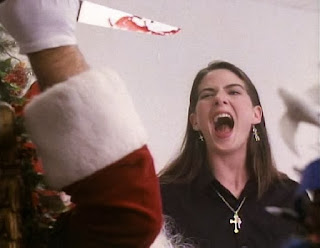 It is said someplace that the third installment of any franchise would be the craziest and staying to true to this, You Better Watch Out delved into the realm of scifi and unspeakable cheese as we continue to follow the further exploits of Ricky, the Santa Slasher of Part 2 and the brother of Billy, the killer of the first installment.

Surviving being gunned down from the previous installment, Ricky is left comatose, his cranium replaced by what looks like a punch bowl with gears (exposing his brain), and now the unwilling participant of an experiment involving clairvoyance, with his homicidal thoughts (aka stock footage from the first movie) being transported into a blind girl, Laura, via telepathy as a way of improving her unique skill.

It was one Christmas Eve when Laura decided to take a break from the project and left to visit her grandma along with her brother and his girlfriend for the holidays. Unknown to her, Ricky had just woken up as well and developed a psychic link with Laura, following it as he made his way to her grandmother’s house while murdering anybody who got in the way.

I guess “peculiar” is the best word to describe You Better Watch Out since although it tried keeping a straight face, the little details and choices definitely made it look more (or rather less) than your average serious slasher flick. 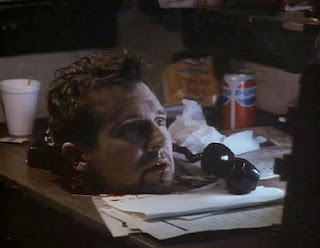 For one, we have the psychic angle that was a bigger plot element than the actual yuletide holiday, with a good chunk of the film focusing and utilizing it. This angle certainly was a huge leap from having a simple story of a traumatized teenager axing folks to death while dressed up as Santa but seeing what the next two installments would do for this franchise, this is as close as we would get to keeping things grounded (The key word is “close”), all the while touching a bit of the supernatural to keep things a little more interesting.

Sadly, as a slasher, You Better Watch Out clunks in ways that it shouldn’t, like the fact that our killer just happen to have an exposed brain protected by a see-through dome that made him look like a homicidal human version of the cartoon villain Mojo Jojo from the Powerpuff Girls. Seriously, after his descent into the rather cheeky and interesting killer who might have been our next quotable quipper of Part 2, why do this? He spent most of his appearance looking like as if he’s in a trance (which is justifiable) and whenever he murders someone, the film does the unspeakable crime of being tame with the lowest kill count and hardly showing any good murders onscreen. 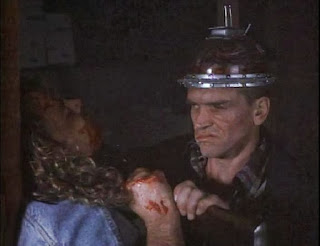 Pacing is slug worthy and the scripting is laughably tiresome at most. The acting is wooden and the special effects are near-nonexistent. There’s scarcely a set and a cast to work with, you think for a film that had the ambition to include clairvoyance and killers with see-through skullcaps would put more effort to entertain us but it seems the producer were trying to take a more subtle and creepier approach to their slasher. (Perhaps something similar to the creepiness John Carpenter’s Halloween but, “killer with a see-through skullcap”. The subtle and creepy approach is not happening.)

The only reason why I can’t rate this film any lower is due to all the unintentional laughs I got from how terrible this movie is. I seriously don’t know what were they thinking when they made this; it’s barely Christmassy, the plot is too outlandish, the killer is a joke, and there’s nothing that memorable or shocking about this film apart from existing, and yet, I still got a few kick out of it. Perhaps it’s the weirdness that got me, the simplistic approach, or both, but this fondue tainted franchise entry tried a dry run to bring slashers back to the basics, only tripping down the fail bridge too many times. I learned to appreciate the effort but a fail is a fail, no matter how many whacky tries done to hide it.