Disciples of The Cheddar: Sorority Girls and The Creature From Hell (1989) 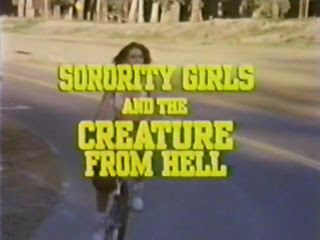 With a title like that, you can only expect…”stuff” from this movie.

A group of sorority girls drives up to a mountain cabin (with a bonus hot tub) where they plan to party, get wasted on booze and pork some guys they invited over. However, things are about to get a little more troublesome when news of an escaped convict skulking around put the girls on edge, unknown to them that something else is already picking them off one by one. Something that was once human. Something possessed by powerful supernatural forces. Something. From Hell!

It may sound a lot but trust me when I say it isn’t; The Creature From Hell runs a meager 85 minutes of nothing but the moldiest of cheese wherein the true horror lies on how bad the production was and the fact it was even made.

For starters, talent isn’t the best word I can use to describe what the actresses and actors were doing for this film as they either overact or underact their roles and their delivery sounded like they were reading off their lines. If you ever wanted to see a girl get overly impressed by some guy’s juggling abilities or a pair of college dudes barely reacting at the fact they just hit a guy with their car, this movie is guilty of having both and more.

Then there’s the incoherent flow where we jump back and through the girls partying, an escaped convict creeping around, and a monster killing people under the orders of giant papier-mâché stone face that sounded like the talking Aztec head from Nickelodeon’s Legends Of The Hidden Temple, which as a whole made the film pretty tedious at a point with nothing of real interest happening until the 40 minute mark. (Though it felt longer.)

Lastly, there’s also the film’s half-arse attempt to do a bodycount (or at least I think they were attempting to) consisting of nothing but tame killings that are anything but memorable. It’s kinda sad coming from a slasher hybrid like this and I know there might be a case of budget here but, for a hellish creature, the least it can do is give us a juicy killing or a workable stalking scene.

Now, you would think I’ll give this film a bad rating for all of this and I am tempted to, for honesty’s sake. But for the right viewers or mindset, this can be an entertaining piece of shit as the overall depravity of the film can double as its own little charm as a “bad movie”. If anything, I like to think The Creature From Hell was a tribute to the 40s and 50s era of “horror” movies such as Robot-Monster and Them!, where the effects are cheap, the story is laughable, the acting is terrible and yet quite fun to watch just to see how bad they were. Mix in a good dosage of late 80s cheese and the clichés of a terrible slasher movie, and the net result is more likely this mind-numbing yet hilariously horrendous experience that gets crazier by the minute until its blazing conclusion.

A mixed-bag of good and bad, The Creature From Hell is a rarity for a lot of understandable reasons and one that offers something stupendously silly for your kicks. See it or leave it, either ways would probably work for our part.