The Woods will be Painted Red: Paintball (2009) 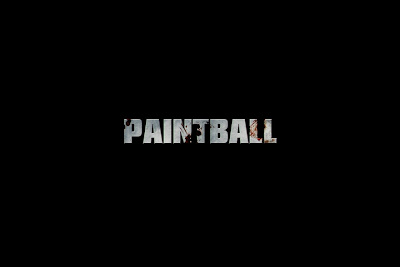 Feeling the need for adrenaline?  To feel alive after countless hours of working behind the desk? Why not get away from it all and experience the ultimate paintball weekend at an exclusive backwoods to get that rush of life?

Eight young workaholics signed up specifically for this and find themselves not only bagged and driven to a secluded mountainous forest but also under the mercy of not a rival team and instead, a real sharpshooter aiming to end them all one by one. What was a supposed weekend of fun and friendly competition turns into a deadly struggle for survival as these victims must learn to show their teeth and live through a predicament where you have to kill or be killed.

As a plot, there really isn’t much going on for Paintball; while the sport isn’t exactly new to tackle for slasher movies with 1987’s Masterblaster having a maniac killing participants during a paintball match and 1986’s The Zero Boys having it as a backdrop for its characters’ survivalist nature, Paintball is a sort of amalgamation of these two films.

Exploiting some basic bodycounter flick clichés like hiding the killer behind POV shots or vaunting nasty kills that some might find either ingenious or cheated (half- if not all- of the best murders were done through the grey-scale infrared vision of the murderer), all the while showing the lengths our characters would go to survive from leaving teammates for dead to first-hand murder, the story is quite easy to follow once you understand the structure.

There were still some flaws to get by, however; since there wasn’t any form of appeal found to alleviate our victims, they're just as whiny, trying, or even cruel as any standard horror flick cast. Usually for these kinds of cases, the killer would have been our bet and, to be fair, he came in pretty close; we never get to find out much about him except that he is brutally imaginative with his killings, making use of whatever resources he can grab hold to kill somebody in the least likely way. (Remember how Michael Myers used a shotgun to impale a victim in Halloween IV? The killer here did something similar, only more work and in grey-scale heat vision.)

In an attempt to add more mythos on this killer as well as on the ordeal our death toll-to-be are going through, there’s also an added element of people paying good cash to see all of this happen in real life. It’s a twist similar to Hostel's or My Little Eye's only they don’t appear anywhere as menacing or intriguing; they’re simply just there, well-dressed with their pockets fat enough to plot all of this, though the only contribution we get to see from them was that they instruct (or rather instructed) the killer on his targets and that they did a little scavenger hunt for the victims in an attempt to give them a little bit of advantage. Out of the ordinary? Yes. Original? Not much. Shallow actually.

It may sound like Paintball have a lot of defects but I can assure you that this doesn’t chip the film that greatly; as I mentioned, it is still quite easy to follow and the little attempts to add some intrigue to the story is admirable despite not working all throughout. The production quality is crisp, the steady pacing helped build some tension around a few moments (though it can get a tad sluggish), gore and make-up effects from CG to practical is sick in a good way, and the film wraps itself up quite nicely in the end.

If you’re the kind of bodycounter who disregards characters and story just for the kills, then Paintball will do nicely for your viewing pleasure. A basic slasher accompanied with lead heavy action, it's just the kind of horror cheapie you can enjoy with a side of chips and cola.

Bodycount:
1 female shot on the head
1 body found burnt against an electric fence
1 male snared then dropped unto an erected rifle, impaled
1 female stabbed on the gut with a machete
1 female shot dead with an automated rifle
1 male stabbed to death with a machete
1 female fell into a spiked pit
1 male had his face smashed in via rifle butting
1 male had his neck slashed with a hunting knife, later had paint mines decimated against his belly
1 male killed offcamera
1 male impaled through a branch
Total: 11
Posted by Kaijinu at 1:57 PM