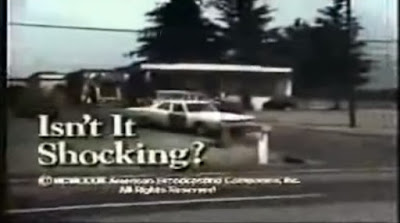 No teenagers? No masked killer? No blood? No problem!

Isn’t it Shocking may not look like a solid slasher but it does feature a relatively simple bodycount and an unusual direction where the killer is made known to the audience but not to the film’s characters.

It tells the story of a small New England town where a series of murders puts one sheriff Daniel Barnes into a strange predicament as all of the victims were elderly and seems to be burnt with some sort of medical tool. The culprit is one equally aged traveler who just recently stopped by and lodged at a local motel. As more of the townsfolks fall victim to the killer, Barnes has to step up his game and find the connection to all of these victims in time before more innocent lives are taken.

Fairly inoffensive, Isn’t it Shocking relied more on plot development in terms of thrills and featured a rather realistic look on police procedural. More often than not, the TV thriller felt a bit soap-operatic as we often shifts back and forth between the sheriff putting the pieces together and him dealing with his everyday life, death of friends and even some complicated love interests; this said, I can honestly say it will not appeal much for those who are looking for a faster-paced bodycounter but those who are fans of TV mysteries who can wait around until the last act won’t be disappointed.

What I came to like about this small screen treat is that the characters have a little simplistic and quirky charm to them and you can tell they’re simply there to live a rather normal life despite the recent death spree. The small town gives a relatively pleasant homey feel and, when the scene calls for it, rather nice backdrops for car chases. It’s a nice change of scenery for a bodycount thriller and one that I can always welcome in place of our teen slashers.

Ending with a fairly positive note, Isn’t it Shocking? may be your grandparent’s murder thriller but it is well worth a look.