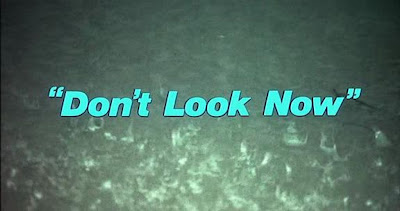 
Released in the 70s, wherein the popularity of Italian gialli are on full force within Europe, Don’t Look Now is a British/Italian thriller that breathes the same kind of artistic flair and ominous tone its Italian cousins are known for, resulting to an acceptable title that can be well-enjoyed by fans alike.

The film opens with a family; the father John Baxter (Donald Sutherland) was busy working on restorations while talking to his wife over the phone. Said wife, Laura (Julie Christie), had just returned from a trip and is excited to see the family. Unknown to them, their young daughter Christine (Sharon Williams), who was playing outside, slipped and fell into a pond while they were talking, wherein the father was first to notice after he couldn’t hear her anymore. Rushing outside, he found her drowned and grieves over the loss.
Some time later since the incident, the couple had grown silent and tries to bury the past by working together to restore the magnificent paintings at an old church. Their stay there, however, are plagued with strange and dangerous occurrences including a pair of sisters who one claims to be psychic, John seeing visions of their late daughter wearing the same red coat she died in, as well as a series of nightly killings involving women. Could there be a connection linking all of this? Is the couple finally going mad from the guilt and loss?

With contexts of the supernatural thrown in with the heavy atmosphere and story, Don’t Look Now can act as a character study on two main casts, focusing on what could be the mentally and emotionally deteriorating as the loss of their daughter began to push them further into possible dementia as well as the lengths one would believe in to keep themselves sane, even if it is actually doing the opposite.

The further we go through the plot, the more we see how the two's married life becomes affected by the loss; with Laura finding more comfort from mediums who claims their child is okay and happy in the afterlife, and John becoming nearly paranoid of losing his wife either from her own possible delusions or the serial killer prowling the canals. No amount of love play (gratuitously shown here, which, apparently, had shocked moviegoers then) and reasoning seems to be getting to any of them, so a good chunk of the tone benefits from this drama and the desperation for answers comes naturally not only for the characters but also for us viewers.

Eventually, the plot ends up rather maddened, with more strange visions leading to an off-putting revelation and a down beaten ending that was deceptively foreshadowed in many scenes prior, mostly through the repetitive use of motifs and imagery incorporated into the story with splendid editing work. It’s a rather ingenious, if not a dour way to end the film, making it one of the more memorable reveals in horror history.
Seeing there's more focus on character and mystery here, Don’t Look Now is a film that defines tastes and patience; if you are into brooding horror and decaying character then this movie deserving of your viewing, but if you are looking for cheap thrills and exploited kill counts, you may need to wise up first before seeing this. True there is a bodycount and a sub-plot involving a killer, but with influences from Hitchcockian thrillers and gothic horror movies, psychological and thematic fear makes a more workable scare factor here rather than a kill count.

It's a rather elegant film and one deserving its cult status; Don't Look Now is a film worthy of any film collection. Distraught, nightmarish, and yet very clever, real keeper for genre lovers!

Bodycount:
1 girl drowned in a pond
1 female seen being fished out dead from the waters
1 male hacked on the neck with a meat cleaver
Total: 3
Posted by Kaijinu at 8:34 PM