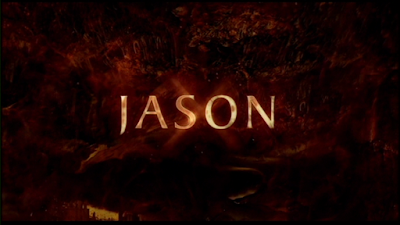 As way to keep the franchise alive while Freddy vs Jason still wallowed around Development Hell, writer Todd Farmer pitched this idea/gimmick of having Jason rampage outside of Camp Crystal Lake, which was already attempted back at 1989 with the commercial flop Jason Takes Manhattan. However, unlike Take Manhattan, Jason made it to his destination AND wreck havoc there the right way.

Where is this location, you ask? Why none other than space!

In 2008, undead mass murderer Jason Voorhees was finally captured by the US government and spent two years as a guinea pig for those who were fascinated by his regenerative ability and apparent immortality after surviving multiple execution attempts since. 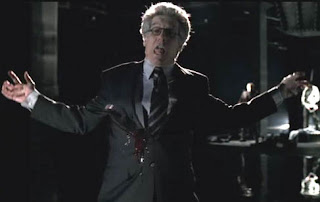 Seeing that the best option for now is to contain Jason until they can come up with a way to destroy him for good, scientist Rowan LaFontaine was about to put him in frozen stasis via cryogenics when the military types (including one played by body horror aficionado David Cronenberg) arrive and try to take the killer away in hopes of further researching his unique non-dying trait.

Unfortunately for them, Jason escaped from his restraints and proceeds to nearly slaughter them all until Rowan successfully lured him into one of the cryogenic pods and trapped him inside, but not before the juggernaut ruptured it with his machete, in the process stabbing the scientist and freezing them both for 445 years.


Now in the future, Earth became too polluted to sustain life and a group of archaeology students is accompanied back to the now dead planet with their professor and gynoid for a field trip, eventually stumbling upon the preserved bodies of Rowan and Jason. Seeing one of them has a high chance of being revived by their technology while the other can be dissected for further studies, the students bring Rowan out of her cryogenic state and welcomes her to the future, blissfully unaware (but soon will realize in horror) that Jason has just woken up as well, ready to show his brand of mayhem to the the space age. 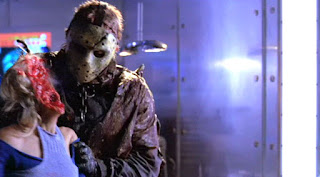 First of, I get it. I understand why many horror junkies are not as fond of this entry as I and a few others out there are and I believe it has something to do with the execution of the concept.

The idea of putting a horror franchise villain in space is mostly referenced as a joke concerning movie series and the fact that they'll just keep going to the point of desperation; this being said, Jason X often looks, sounds, and feels like a bad B-grade movie and, for all honesty, it is close to being one (complete with a nonsensical and hole-filled plot, average acting, and a trace of bad cheese that is everywhere considering how hard the movie was trying to sound hardcore and futuristic) if it wasn't for the considerate budget and production. If anything, this movie is the Friday the 13th franchise's shark-jumping and many horror fans can sense that.

But, seeing that we are being treated with Jason being in friggin space, perhaps that was the point; the series was never the same by the time they decided to bring Jason back to life ala Frankenstein's monster back at Part 6: Jason Lives and the films following it since were getting cheesier by the moment. This being said, yes it is nonsensical, but it has this comic book feel to the plotting and flow that its silliness can be entertaining and Jason X provides enough slasher theatrics and B-movie cheddar to keep a bodycounter happy.

The kills were barely CG assisted and they are plentiful here may it be on or off camera, this including a bunch of military men being mowed down at the beginning, an entire assault team being hunted down in a research ship, and even a space station being indirectly destroyed with Jason's massacre being the cause, all of them done in complete Voorhees fashion though it is kinda noticeable how stronger our slasher seems to be in this movie. (He sliced through metal more than once using nothing but a machete. A Machete!) 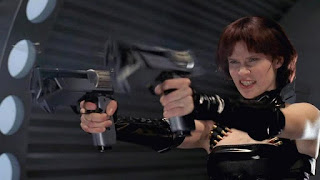 We are also treated with some fight sequences, most memorable being where Jason fights a grenade launching gynoid and momentarily loses to her after being blasted to bits. However, just like Jason Goes to Hell, losing a body isn't a big deal for him since he later comes back as a cyborg dubbed Uber-Jason after a rather convenient set-up. I have to say that while I'm not a big fan of his new mask in this form, the bulked-up and futuristic sleek look, along with his piercing red eyes, apparently doubled strength and durability makes this Jason menacing enough to strike more fear and awe, just a shame that this upgraded form is so overlooked and underrated among fans.

The rest of the characters are an odd bunch as they are a mix of your standard teenage victims and scifi action tropes such as the pompous authority, the ignored scientist, the badass militant, and even a death squad. Sadly, since the film is modeled after a standard slasher flick, they're as single-dimensional as they can with only a few standing out for better or worse, and their purpose are easily reduced to just futuristic lambs for the slaughter. 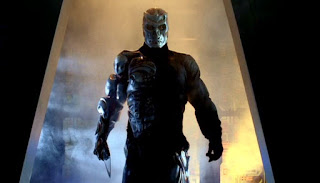 Paced with enough explosions, dodgy CG and a final shot that raises more fanboy questions, Jason X may fail as a horror film for the masses but it is what it is, and very underrated one at that. A space age slasher that's silly and bloody, made for the hardcore fans of its franchise and for B-flick enthusiasts, the only thing I recommend when viewing this is just switch down the brains and let the mindless campy spacey carnage take over!

Bodycount:
1 male murdered, method unknown
1 male beaten with a machine gun
1 male thrown into friendly fire
1 male had his neck broken with chains
1 male bludgeoned with a noose pole
1 male impaled through a thrown pole
1 male repeatedly beaten against a metal door
1 female had her head frozen with liquid nitrogen, face destroyed against counter
1 male ran through with a surgical knife
1 male had his back broken against a wall
1 male had his head bashed against a wall
1 male had his neck snapped
1 male falls and skewered through a giant drill
1 female found with a throat cut
1 male sliced in half with a surgical knife
1 female found impaled through a crane hook
1 male dismembered offcamera
60 soldiers die in an exploding space station
2 males die in an exploding space station
A number of people dies in an exploding space station
1 male dismembered offscreen with a machete, head later seen
1 male beaten against a control panel, electrocuted
1 female immolated in a crashed ship
1 male caught in an exploding ship haul
1 female sucked into space through a metal grate
1 virtual reality female beaten to death
1 virtual reality female bashed to a tree
1 male scorched through atmospheric re-entry
Total: 87+
Posted by Kaijinu at 4:58 PM