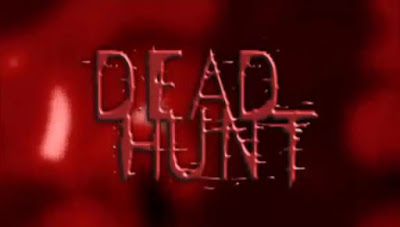 It was supposed to be a simple gathering between forum writers and reviewers, some meeting in real life for the first time. A few small talk and bitching happened, boozes were drank, and some were even thinking of scoring some sweet bedroom action later that night, for this small group of amateur critics, things were going just fine until they soon find themselves trapped inside a rigged warehouse and a balaclava-wearing killer began going through them with the sharp end of a knife.

Why are they being snuffed out is the killer's little riddle for them and it apparently had something to do with their profession as critics; with this in mind, Dead Hunt could have been a film poking fun at devoted horror flick reviewers (such as myself and maybe even you, dear reader) but it instead took an easier route and gave us your standard bodycounter.

The story did start off with the characters being geeks and them some, talking about movies and/or simply hanging around; once the bodycount starts, most of these people were easily reduced to typical slasher victims, doing some really cliched decisions that inevitably sealed their fate with the killer's knife. I guess I was hoping for a more tongue-in-cheek approach on the characters seeing they're horror fans in a horror flick but with Wes Craven's Scream films already tackling that not once but at three times as of Dead Hunt's release, maybe a stroll back to simpler roots wasn't that bad of an idea.

If anything, it's the film's killer who dwelled in the meta-concept, taunting and monologuing their nitpicks on each victim before finishing them off. It's a little silly but it kinda paid off once their identity and their motive were revealed, as it involved something pretty reasonable if it wasn't for the extreme measure.

While not exactly the most impressive in terms of onscreen talent, as well as guilty of having some terrible audio and early age computer effects, the story is easy to follow especially once the killer starts to blabber about their criticisms. Right then and there you can pick up the pieces and solve the puzzle with ease. Some gore and make-up effects were pretty good though the best kills happened offcamera, which is a tad disappointing but otherwise okay on my book, especially if the killer committing them sports an awesomely simple maniac get-up. (Red faced balaclava and trench coats never looked so sleek)

It isn't much but Dead Hunt is an okay movie, forgettable but watchable nonetheless. It has some neat ideas and good production despite a few flaws and budget issues, so I guess this is a passable effort even if it lacks any originality, fairer acting, and/or an imaginative killcount. I say give this one a go if you're feeling for something really simple for your cinematic bloodlust.